Global Television has cancelled Bomb Girls by pretending that a made-for-TV movie tying up plot ends is good news. The cancellation is for the usual reasons: low ratings. Lots of other shows have been cancelled for low ratings and some have been famously supported until they could build an audience. Bomb Girls could be such a one and is a good candidate because it does such a fine job of serving an important and underserved demographic: women 18 – 49. 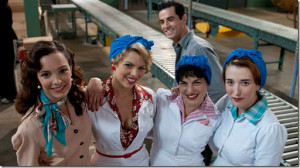 Bomb Girls’ main service to this demo is that it provides useful historical background and compelling social justice to people who may have outlived the historic memories but need to be mindful that the issues remain. World War Two veterans and their supporters are disappearing rapidly and their stories have been supplanted by tales of 60s, 70s and 80s post-Modern adventures. Canadians live in a multi-cultural society focused on a struggling economy and terrorism, both foreign and domestic. 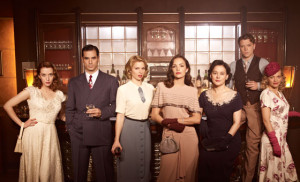 Bomb Girls reminds us that there were disenfranchised, second-class groups in wartime Canada as well. These were women, same-sex practitioners and anyone with a ‘strange’ last name. While we might congratulate ourselves that we have evolved, these issues are alive and well. Canada’s cultural evolution can been measured in centimetres rather than metres.

And so there is a fan campaign to resurrect the show (www.savebombgirls.com, no longer active), even if it means moving it to another network. Successful or not, it is a great testimony that the show was serving its audience well. 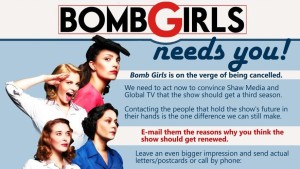 And for me, that is Bomb Girls’ gift. It provides me with a time shift within which to see people suffering persecution and oppression of various kinds, but also with the opportunity to reflect that persecution and oppression are still with us, still needing naming and redressing. Bomb Girls represents a 70-year-old Canada with outmoded cars, phones and music, but with issues that have sustained.

Thank you for the reminder.