The Role of Media in 21st Century Public Life

The April 15 bombings at the Boston Marathon and the subsequent events have provided a fascinating opportunity to explore how  the digital media environment has changed life. The affordances exercised in the search for and apprehension of the Tsarnaev brothers has provided a powerful and illustrative case study for the current state of media presence and influences. Some of these have been well-documented by The Washington Post, but the salient items for media study are as follows:

The explosions occurred in a public space where numerous professional and amateur cameras were recording as they detonated, so news broadcasts had video of explosions rather than being restricted to the more common aftermath images. 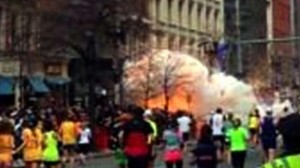 That means that both public and law enforcement had access to quality data, setting a precedent that sustained throughout the events. The finish line was being surveilled and recorded by several cameras. Amateur videos and photos were freely contributed to the collection, providing authorities with more data than they could process.

President Obama appeared almost immediately, asking for calm and patience, but assuring Americans that the perpetrators would be found and punished. 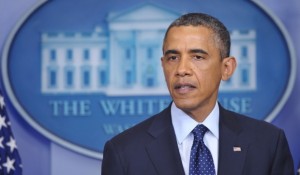 Authorities opted to crowdsource the images, releasing them to news media and asking the public’s help in identifying the suspects. Many of the images and videos were posted to Reddit, where a set of armchair sleuths looked for patterns and aberrations that might betray the bombers. The amateurs had the best of intentions, and shared their findings with law enforcement, but their enthusiasm resulted in several false accusations that put pressure on the authorities (and hopefully provided a lesson for the false accusers).

One reason for the authorities releasing the images was to enlist the public’s assistance in identifying and locating the suspects, but another—equally important—reason was to limit the damage being done by amateurs naming innocent people as the bombers. Some news media were complicit in publishing the amateurs’ findings as news, compounding the damage.

An early identification occurred in hospital, as one victim regained consciousness after surgery and—using pen and paper—identified one suspect .

The crowdsourcing resulted in many more identifications, including from the brothers’ relatives and neighbours. It likely precipitated their flight, as their return to their normal lives in the days after the bombings suggests that they thought they had maintained anonymity. This might also explain why they appear not to have had an escape plan. 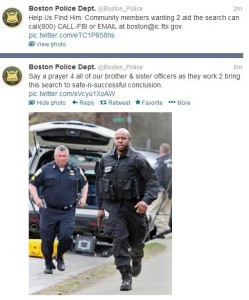 As the brothers made their awkward escape, killing a law enforcement officer and carjacking an SUV, their photos were captured on a gas station security camera, pattern recognition confirming their identities from the marathon photos.

Authorities also asked people to stay inside to allow law enforcement officers to operate efficiently. Most complied, but the military presence traumatized many. 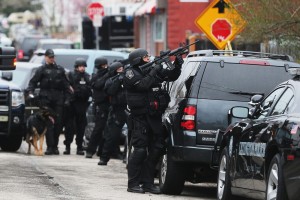 Dzhokhar Tsarnaev was discovered by a homeowner when he investigated a mysteriously damaged boat cover in his backyard. He called 911 and authorities used thermal imaging (an infrared camera) to ensure there was someone in the stored boat. 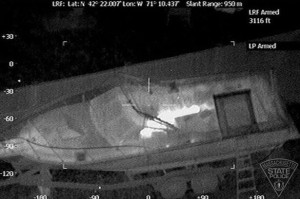 When Tsarnaev was cornered, reporters flocked to Watertown but were held back by law enforcement. As reporters stood around, haplessly filling time with replays and conjecture, neighbours of the boat owner were tweeting, i.e., reporting news and scooping the pros. To maintain currency and control, reporters also tweeted, or retweeted, and their tweets were posted to newspaper websites as breaking news.

On April 20, time was taken at the beginning of the Red Sox vs. Royals game at Fenway Park to honour the first responders. At the 8th inning break, when tradition has had the fans singing Sweet Caroline at every game since 2002 (Wikipedia), Neil Diamond appeared and led the singing of the song. He said he had brought love from the whole country. 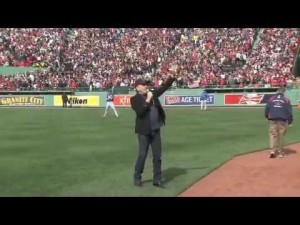 Diamond had flown overnight from Los Angeles to appear at the game. He had arrived without warning and asked to sing the song. The Red Sox management were glad to have him. It was a healing moment as 35,000 people shared a happy song with its creator. They would have sung it anyway, but sharing it with Diamond gave it greater importance. Music and songs are often used at funerals and commemorations to aid the healing process. While funeral and commemoration songs might be more religious, Sweet Caroline definitely played a spiritual role that day.

The media literacy take-away from all this?

The bombings were high-profile because they were executed at a high-profile event where there would be generous news coverage. That figures into the terrorist agenda, where impact is important. 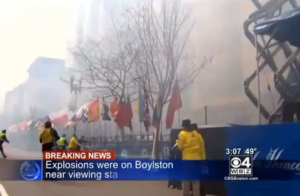 The official and unofficial cameras recorded the bombings, but also events before and after, including the arrivals, actions and departures of the brothers. Pattern recognition yielded their images. 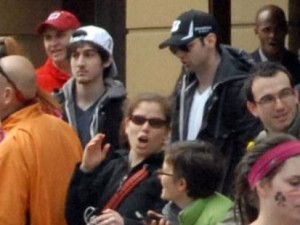 Crowdsourcing also tipped the brothers off before they could be arrested non-violently. They committed further violence, which drew attention and resulted in another set of images that confirmed their identities and whereabouts.

Twitter became a major news source, and dominated the traditional news media during the lockdown. It has since become a vehicle for fund-raising to aid the victims.

Infrared cameras were used to identify and locate Dzhokhar Tsarnaev in the boat so that no law enforcement officers were put at risk peering into the boat.

Neil Diamond’s appearance to sing Sweet Caroline at the Red Sox game played a healing role, as music so often does, after a traumatic experience.

Just as social media flatten hierarchies and make more information accessible, the events in Boston were shared in the global village. People and authorities shared the grief, problems and solutions—perhaps messily—using old and new technologies to identify, locate and apprehend the suspects. After the arrest, a troubadour journeyed to the village to help the people heal their traumas. Their actions were commemorated on Youtube.

These events occurred across old and new platforms spontaneously, outside the control of authorities who could only react as participants in—rather than controllers of—the agenda. That is a consequence of open information in a democracy, and it might help us understand why less democratic societies are struggling mightily to maintain control over information and knowledge.

Life, as they say, will never be the same. This is the new normal in an enriched media environment.