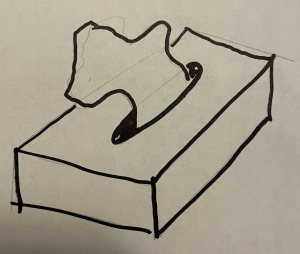 This idea is an extension/remix of an existing concept I saw several years ago. A frequent traveler had created books for tourists to help them get essential services when they could not speak the local languages. The book was a series of drawings, each drawing representing travelers’ essential services. For example, there was a drawing of a glass of water to be used when they needed water. There was also a drawing of a toilet when they needed to inquire for that. The idea was that they would show the appropriate images to people when they arrived at a restaurant etc. 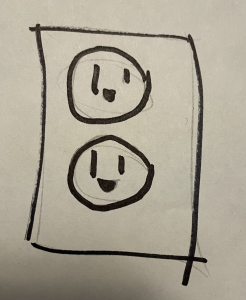 This would be a media production project that would implicate several of the Key Concepts. First of all, it would be created for specific audiences. If it were created for child travelers it would contain imagery appropriate to their age, maturity and needs. In other words, a child’s image collection would not include a beer or wine bottle even though that might be appropriate for a general traveling population. But a child’s image collection might include a playground or toys. Or a recharging station for their tablet.

So part of the fun and critical thinking for students would be to imagine which images to include and which images to exclude depending on the audience and situations. They would need to imagine all the situations that might occur. Then they would have to imagine the most appropriate image to represent the ideas. This is where it could be really fun. There are many ways to represent food and students would have to imagine and create the most universal images. This could become a great group debate.

Students might also have to do some cultural research: what does a toilet look like in Japan or South America? What foods are most likely to be served in an Italian airport? etc.

The class could either create their own versions of the entire travel book, or they could break into groups and produce ‘chapters’ appropriate to specific activities. For example, travelers usually patronize restaurants or food trucks. A whole ‘chapter’ could therefore contain images appropriate to restaurant rituals. Travellers might also need to buy batteries, even batteries of a particular size/code, so…

The original product I saw was a small book about 10 cm square with very basic line drawings on each page. Students could produce the same kind of book, but they could also produce an electronic set of images that people could access on their smartphones. That was not possible when I first saw the idea as this was before smartphones and easy graphics.

This could be a fun production activity that would implicate several Key Concepts:

Form and Function are closely related; and

(Students might be tasked to describe which of the Key Concepts their image designs engage.)

It also scales: it could be a valid activity from K – 12.

Here is a potential lesson based on this idea:

Images to Live By

Canada welcomes newcomers everyday. Some of these people might not speak or understand either of our official languages. That means that they might not understand the languages used in buildings, stores, on roads or in schools. Until they learn more of Canada’s official languages, how might we help them communicate their ideas?

One way might be to provide them with a collection of images that helps them be better understood. These images need to be appropriate to newcomers’ needs and very easy to understand. For example, they might be upset about something, but their audience might not know why or how to respond. They might be upset because they are too hot, need a toilet, have a headache or are hungry. What images might they show someone that would quickly tell them what they need?

This project invites you to create a set of images for specific people in specific situations.

1. Imagine a situation where someone who doesn’t understand the local languages needs to communicate quickly and efficiently. Situations might include arriving or departing an airport, shopping, learning, taxiing, staying in a hotel, ordering food, attending school, etc. Choose ONE situation.

2. Imagine the communications challenges that person is facing. (“They need to tell or ask…”)

3. Imagine the people with whom they are communicating. (What images might the audience understand or NOT understand?)

4. Imagine a set of images that might help that person communicate their needs.

5. Create the images. You might create several draft images for one idea, then compare and contrast their qualities to choose the most effective and appropriate one.

You might print the images and create a book or you might put the images into a presentation file that can be shown on a smartphone or tablet.

Consider the two representations of a toilet below.

How are they different? (One is more 2-dimensional and the other suggests depth.)

Why might one be easier to understand than the other?

Which one would you include in a travelers’ guide? Why? 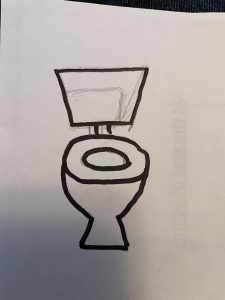 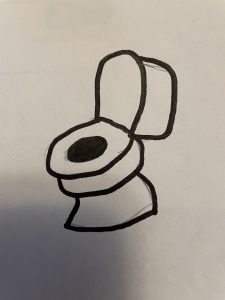 Extension: share some of the draft images you designed for a specific communication and—using compare and contrast—explain why you chose one over the others.

Do my images clearly communicate only one idea?

(If an image can mean several things or might be misunderstood, it’s a poorer choice.)

Have I omitted/forgotten any important images?

(If the user has a need that isn’t addressed by your images, they will be frustrated.)

Will most audiences understand the images?

(The images must be easily understood by both the user AND their audience.)

Show your design(s) to other students and ask them what they think they mean. Their responses will show if your designs are ambiguous or inaccurate.

Parenting Tip: This could be a fun family activity for children whose schooling and/or mobility are challenged.

What might be the effects of a real-time interactive transit map?