Crazy Town, by Robyn Doolittle, is “the astonishing inside story of the world’s most infamous mayor and his troubled family.” Ms. Doolittle does a great job of documenting the Toronto Star’s reportage of Rob Ford’s mayoralty while working to maintain fairness and objectivity. Her book should be on every Toronto voter’s reading list. 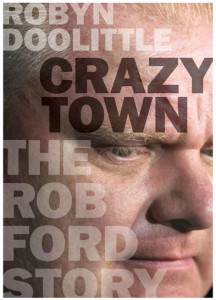 The book should also be on the reading list of anyone interested in media literacy. Ms. Doolittle’s efforts to justify, explain and validate the Star’s often maligned and criticized reporting of Rob Ford’s various scandals has resulted in a valuable description of the intricacies of journalism in the 21st century.

Many of us saw the headlines, the news conferences and the late-night television commentary. Crazy Town provides the backstory to much of these experiences and therefore fills in holes in our understanding and knowledge of the events.

One of the best-known news reports was Robyn Doolittle and Kevin Donovan’s description of seeing Rob Ford using a crack pipe in a smart phone video. The book goes to great efforts to describe the investigation, the negotiation, the communication and the meetings with the video’s seller. It also details the many internal meetings at the Toronto Star that discussed ethics, repercussions, ramifications, legal and personal concerns. The combination of the technical steps involved in the investigations as well as the journalistic issues wrestled with at the Star do a wonderful job of helping people understand and appreciate the complexities of newspaper reporting. Anyone wondering about the difficulties, challenges, and timelines of responsible reporting will find answers here.

I doubt that Ms. Doolittle intended this book as a document of 21st century news gathering and recording. But it is. Rob Ford will inevitably fade once his public life is complete. This book may similarly fade but its lasting value will be the careful documentation of the complex interplay of people and technology in 2010 – 2013 in Toronto.