Dove’s new ad campaign embeds the value of recognizing and appreciating one’s own natural beauty, and may be successful for those who are feeling insecure in the looks department. This ad has considerable power to persuade, partly due to its deft use of fades, music, and emotional narrative. Like Dove’s earlier ad that depicted a model morphing from a natural to a glamorous beauty, the impact is in the visuals. 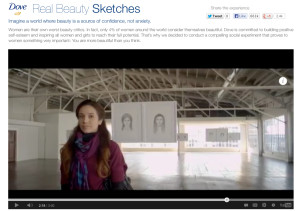 Like any other brand, Dove builds its meaning for its target market through values implied in its advertising. As these values must reflect those of the targeted consumer, we can deduce that Dove’s target is the average white, middle class North American woman who has the luxury of worrying about how she is perceived by others.

(Dove is one brand owned by Unilever. Others include Axe, Degree, Suave, and Vaseline. As we would expect, these other brands express a vast range of values quite different from Dove’s brand expressions.) 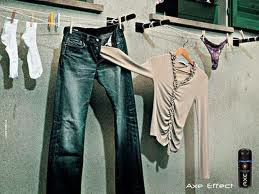 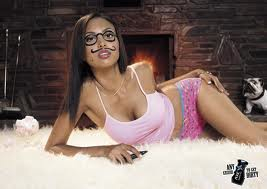 Dove’s overt message appears to be that (natural) beauty is a woman’s most important attribute, as it significantly influences the quality of her life. Reading against this grain (an oppositional reading), (natural) beauty is more important in your life than wit, intelligence, or integrity, especially if you are a white, middle class woman. Ironically, a woman who does not feel she is as “naturally” beautiful as the women in the ad, might be persuaded that there is no hope left for her.

The importance of natural beauty has become central in the age of photoshop and the power of modern medical technologies to alter the (“natural”) human face. The word “natural” is being redefined today, as we can now construct any look at all through digital tools, from a “naturally pretty” to an impossibly perfect face. So “natural” may come to mean “unfortunately real”, or at the other end of the spectrum, anything that falls a little short of digitally-created perfection.

Enter Dove, who weighs in by soothing the consumer’s ego, giving her a break from her own anxiety. Natural is good, even vital (a form of pressure in itself, perhaps). But Dove would like its target consumer to believe that she still needs a particular product to finish off the package. That she is not natural enough without Dove.

Here, Dove contributes to the cultural discourse about female beauty by promoting its importance in a form (“natural”) that might be more accessible to women than the digitized glossy version they are usually presented with. Dove does not suggest why women do not see themselves as they “really” are, only that they have a distorted perspective. The missing piece here is a critical question: why might women be so unrealistic and critical about their individual features, to the point of distortion? Might the answer be that everyone tends to do this naturally? That we are all more critical of our faces than others because we look at them every day, close up? We do not contextualize them with our personalities like others do. Other people do not examine our features, rather we come as a whole package.

Beauty as an ideal is a core archetype in all cultures, but has traditionally been defined as a physical ideal, like strength. And it may be true that beauty is in the eye of the beholder, but this expression does not serve companies needing to make a profit from soap. Fold the need to be beautiful into need for self-esteem, and voila! – you have a classic anxiety disorder that can be exploited ad infinitum. 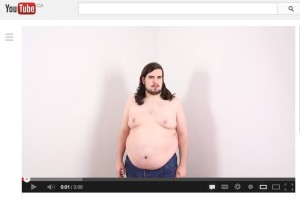 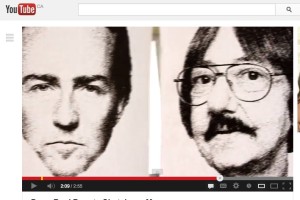 Spoofs and commentary are proliferating in both the mainstream and social media. Judging by the range of responses to this ad on the web, it is a cultural flashpoint, a polarizing piece, teasing out the male point of view on youtube, as well as an alternative and arguably female reading, through a spoof on men’s lack of humility about their looks.

• what is “natural beauty”? How does Dove define it?

• why might a woman’s natural beauty be so important in her life, according to Dove?

• what groups are represented and/or omitted from the ad, and why?

• what visual and aural techniques does Dove use to build the impact of its message?

• how might the artist be influenced to draw in a certain way?

• what assumptions does Dove appear to be making about women and their self esteem? Do you agree? Why or why not?

• what equivalent issues do males have regarding their looks? how does advertising frame these issues?

• what other products does Unilever make? What different messages do their ads contain?

• research responses to the ad campaign on the web: how have audiences exploited, enjoyed, examined, and affected Dove’s message?