From Jian Ghomeshi to Abuse of Power 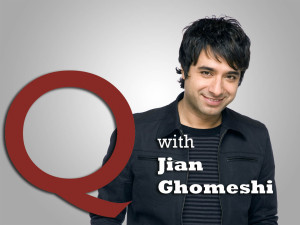 What a wonderful, complex and compelling media literacy case study the Jian Ghomeshi story is becoming! Is the story about tolerance of sexual deviance? Yes! Male privilege? Yes! Celebrity? Yes! Social Media? Yes! Corporate Citizenship? Yes! Entitlement? Yes! Rush to judgment and due process? Yes! Media literacy? Ohhhh yes! All of these and more can be spun out of the events, including the term ‘media bomb.’

Mr. Ghomeshi’s Facebook post (‘Dear Everyone’) appears to be a strategic PR move to ‘own the narrative,’ to get ahead of and prepare his audience for the attacks and commentary that he anticipated would come from news and social media. The Facebook post constructed Ghomeshi’s version of reality and tried to contextualize/control what he anticipated was coming. Mainstream media had been approaching him with allegations for months. His employer had kept allegations quiet. It couldn’t last. Best to ‘own’ the story, admit to some facts, refute others, buffer the storm.

That Mr. Ghomeshi chose Facebook as a platform to explain his version of the story is a first stop for media studies. His statement could have been communicated via a press conference, a TV or radio interview, on his own website or an op-ed piece in a major newspaper.

How might Facebook’s audience respond to, remix or repost his statement?

Why might it be important for people to be able to read the entire statement for themselves instead of having it summarized or commented upon by others?

Mr. Ghomeshi was working with, and had presumably hired, a public relations firm when he placed his Facebook post. Do you think the PR firm gave him good advice? If not, what advice would you have given him?

For a person known for his strong oral skills, why might he have chosen to WRITE his statement?

The Facebook post strategy worked for a while. When the firing was first reported, people both famous and unknown endorsed his version and criticized the CBC for his unfair treatment.

And then the media bomb exploded. ‘Media bomb’ refers to a phenomenon wherein an event triggers a series of news reports and commentary that evolve from—but ultimately overshadow—the original event. The original event might be the ‘blasting cap’ or first fissioning atom, but it causes further and larger explosions that go beyond the original. Mr. Ghomeshi very quickly became a part of a story about much more than whether the CBC had acted fairly when it fired him. In fact, he has been so identified with misogyny, deviance, violence, male privilege and abuse that some people predict that his public career is over.

The Facebook post claimed that 1) while Mr. Ghomeshi’s sexual activities were unusual, they were a part of his private life and therefore not relevant to his professional life; and 2) while his sexual activities included physical abuse, the abuse had been agreed upon consensually between adult partners, so was legal.

Several women claimed to have been physically abused during sex with Mr. Ghomeshi without consent, both by name and anonymously in print and video interviews. They refuted the Facebook claim that the physical actions were consensual, yet none has said that they objected to their abuse at the time, nor—as of this writing—brought assault charges against him. Police are investigating and charges may yet be laid.

Why might Mr. Ghomeshi’s sexual partners not have reported his physical abuses?

Why are some of these women reporting it now, months and years after the fact?

Why might some be willing to reveal their names, while others prefer anonymous allegations?

What stigmas might women fear for reporting physical abuse?

How might they have acted if the physical abuse had occurred separately from the sex? I.e., might it be the blend of sexual relations and abusive acts that has caused them to be silent or anonymous?

How might Canadian society’s attitudes towards sex—one of our most private activities—have influenced their inactions and actions?

How might the fact that more than one woman admitted to being physically abused without consent have encouraged others to break their silence? I.e., what is the effect of being a lone complainant as compared to one among several?

How might the fact that the victims of the assaults were mostly women—rather than men—influence the reporting of abuse?

What might it mean that Ghomeshi’s firing has become a media bomb—a much bigger and multidimensional topic in mediated conversations than the firing of one man? Was male privilege and abuse of power simmering under the surface of Canadian society? For how long?

Imagine, for example, that a famous FEMALE CBC broadcaster had had ‘rough sex’ with several male partners that had resulted in their being injured to the point of bruising. Might the men be silent about their treatment until one bravely broke the silence?

Might the CBC be as quick to fire her?

How might news and social media responses have been different?

There are the corporate courtroom, the government courtroom and the virtual courtroom. Each has had a role in this narrative and their actions are not yet complete. They are very different institutions, operating by different sets of rules and at different rates of speed. Each, however, has a plaintiff, defendant, judge, jury and jailer. 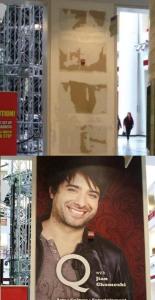 Is it OK for a corporation to fire someone for activities in his private life that do not affect his job performance?

Mr. Ghomeshi was innocent in the government’s courtroom at the time of his firing. Might it have been better for the CBC to suspend Mr. Ghomeshi from his duties until an official criminal investigation was completed, or is criminality irrelevant to the way that the CBC views its responsibilities to its audience?

Might the fact that Mr. Ghomeshi is a public face and voice be the reason for his firing? I.e., might the CBC have acted differently if Mr. Ghomeshi were an unknown behind-the-scenes CBC employee?

Would you continue to listen to Q knowing what you do about the allegations against Mr. Ghomeshi?

What would YOU do if you were Mr. Ghomeshi’s boss?

How do the CBC and Mr. Ghomeshi’s situations differ from that of a police department, also a governmental institution, where officers are often suspended from duty—but not fired—until investigations are completed? 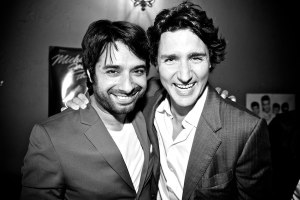 The virtual courtroom—commentators, Twitter, blogs—has been very active, not to mention assertive. Mr. Ghomeshi’s Facebook Likes have dropped continuously since he was fired. Newspaper and online commentators have lost no time in expressing their opinions. As the number of his accusers approaches double-digits, the case against his being physically abusive without consent gets stronger.

People are welcome to form and express their opinions. Canada is democratic. But some of the opinions are strong—so strong that we might wonder how their authors have achieved such a sense of entitlement to their opinions. Some have expressed disapproval of his firing and petitioned the CBC for him to be re-instated. Others have called for his immediate imprisonment, or worse. What is curious about some of the responses is how radical they are and how comfortable their authors are with their radical statements.

What is due process, or due diligence, in the online environment? Mr. Ghomeshi might be  guilty of non-consensual physical abuse during sex (as many women allege), he might be entirely innocent (as Mr. Ghomeshi alleges) or he might fall somewhere between. Canadians are officially innocent until proven guilty, but this tenet seems to be missing from the online world.

Why do so many people feel so comfortable deciding not only his guilt but his sentence?

What is there about blogging and tweeting that makes people express themselves this way?

Is it that we usually sit alone at our screens and feel that no one is watching, so we can write what we want?

Is it that we see such an ongoing rush of opinions on everything from restaurants to labour strife in foreign countries to smart phones that having and expressing opinions is not only normalized but expected?

Do we feel obligated to having and expressing opinions? …that we are letting the online world down if we demure from expressing an idea? Is ‘I don’t know,’ or ‘I’m not sure,’ or ‘I’d like time to think and research that issue further before deciding’ an unacceptable response online? Why?

Male privilege and abuse have become larger issues than Jian Ghomeshi’s professional and private activities. That is the media bomb, where the reporting of events such as MPs or football players abusing people by taking advantage of their privileged positions is a good thing. A good thing too that the shaming is public shaming, because these issues need to be more transparent.

Hopefully teachers will use these news reports and editorials as discussion starters for examining the issues. Students need both time and guidance in understanding and appreciating issues of abuse and why it is unhealthy for everyone. Canada is still in need of honest soul-searching, attitudinal change and role-modelling.

The issues of male privilege and abuse are media literacy issues, as are the issues of the virtual courtroom’s judge, jury and jailer. Let’s hope the conversations are long, honest and deep.