Representation and White Supremacy in Canada 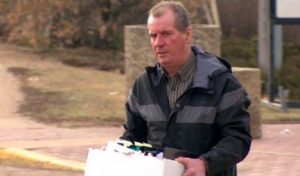 Our February 5, 2018 #K12Media chat focused on representation. We focused primarily on the Media Studies definition of representation and included recent examples from the Dr. Martin Luther King Superbowl ad.

The definition of representation we used comes from “Queensland Senior English”:

There are two important aspects of representation:

It is important to recognize that textual representations are re-presented versions of people, places, things, objects and concepts. These selective constructions do not reflect what is in the world. Representations are always influenced or mediated by ways of thinking about the world. They are not fixed but can change.

We explored the ways that public figures may represent themselves as well as positive examples of representation by groups underrepresented by mainstream media. It was such a fruitful discussion that we decided to continue the conversation for another #K12Media chat, on Monday, February 12. We were glad to be continuing the topic because representation gets at the heart of so many of the key concepts of media studies and also shapes the ways we are conditioned to see the world.

Many Canadians tuned into a court case and the not-guilty verdict of a man charged with murder. The response to this case has peeled back and revealed the ways that Canada—as a colonial nation—has been shaped by the representations of First Nations, Inuit, and Métis peoples (FNMI), as well as how immigrants have represented themselves. These representations are played over and over, subtly and not-so-subtly across a variety of media platforms. They show up in the ways that headlines are written and in the ways that stories about FNMI often carry powerful undercurrents.

As women who benefit from white privilege from settler/immigrant ancestors, we live on land that has been claimed by Colonial Canada. This colonial perspective affords us inviolable rights, rights that are not extended to people who do not look like us, may not speak like us, or may have ancestors who lived on Turtle Island (the Indigenous name) long before most of it became the land currently known as Canada. It is time to really examine the ways that this White Supremacy benefits some and limits many. To that end, the focus on representation this week will be directed toward the ways white supremacy is being constructed and reconstructed within and across a variety of media platforms. We offer you these very preliminary prompts and entry points for discussion. We will surely pick up on these threads during the chat February 12, 7:00 p.m., but we hope that you will begin conversations with your students.

Some key questions to ask (of any representation: article, image etc):

The authors/perspectives below have been selected because we feel that they help us to better understand white supremacy and our colonial past and present. They challenge the representations of the Gerald Stanley trial and verdict in profoundly important ways.

Reactions/Responses to the Stanley trial and Verdict: 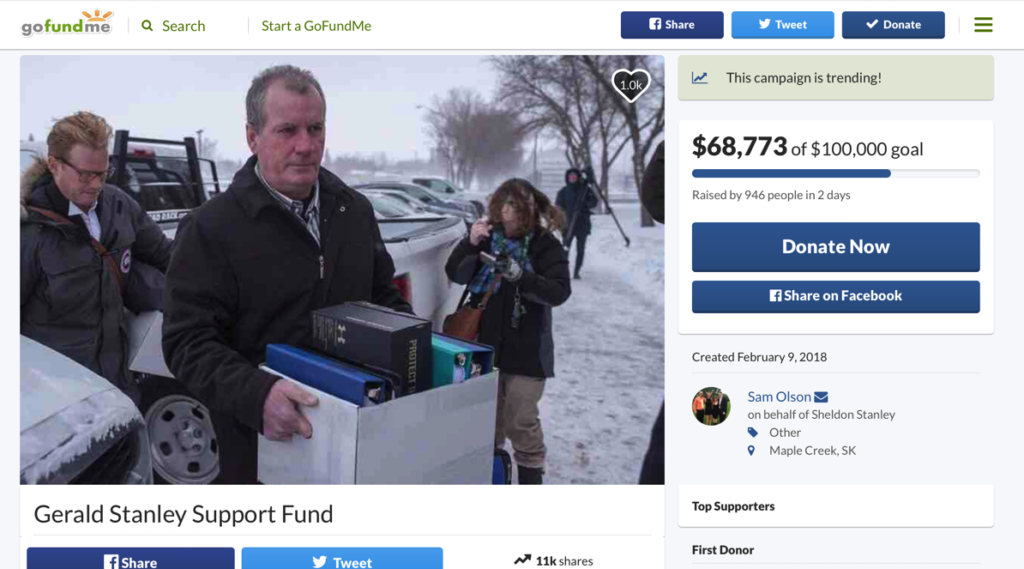 Go Fund Me Campaign that violates the site’s rules is not taken down: 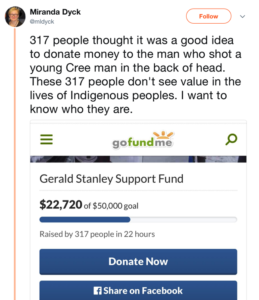 Does “naming and shaming” provide a disincentive for those who proudly support white supremacy?

Compare that fundraiser to the #JusticeForColten campaign: 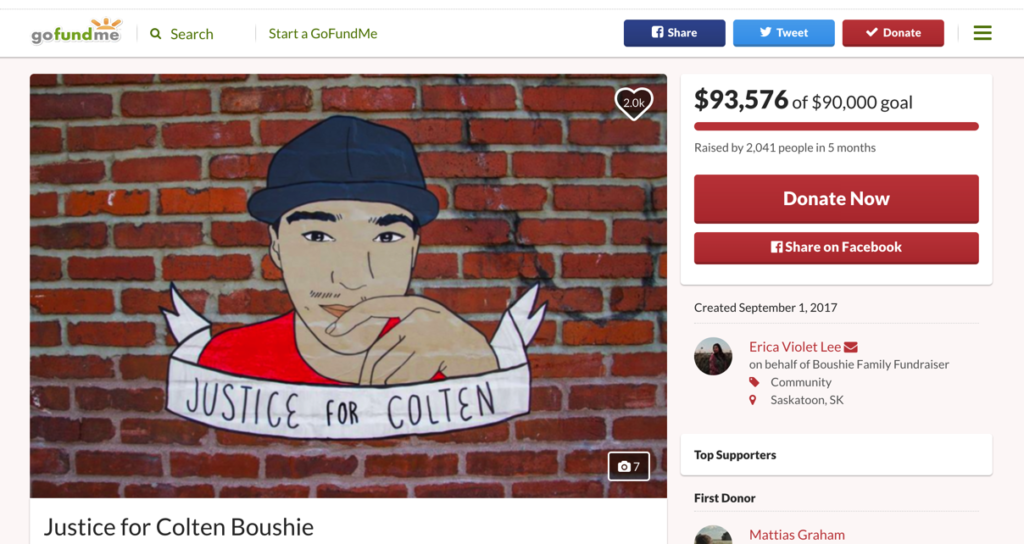 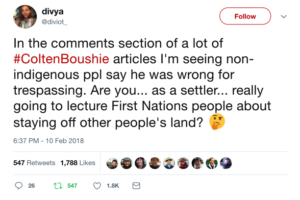 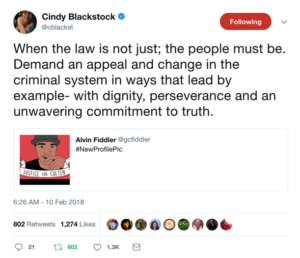 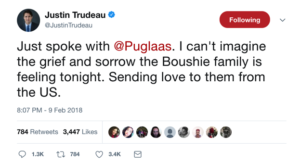 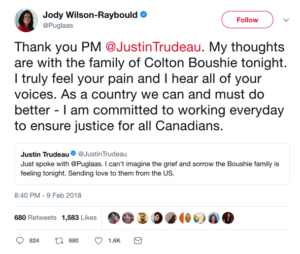 How do these responses help us to understand or process the verdict?

Which approach is most effective? Least? Why?

Which responses deal with the issues of injustice? Which do not? Why?

Paradkar, Shree. “Our Reaction to Injustice for Colten Boushie is a reflection of our soul as individuals and Canadians” 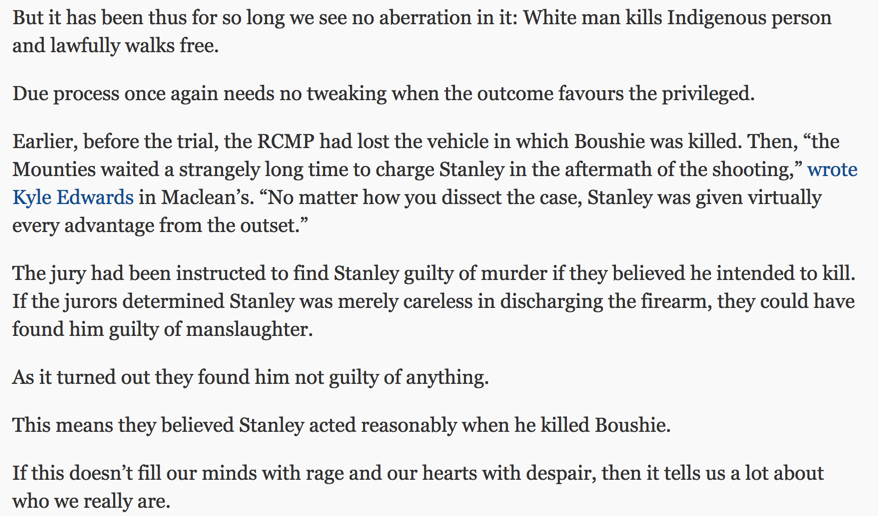 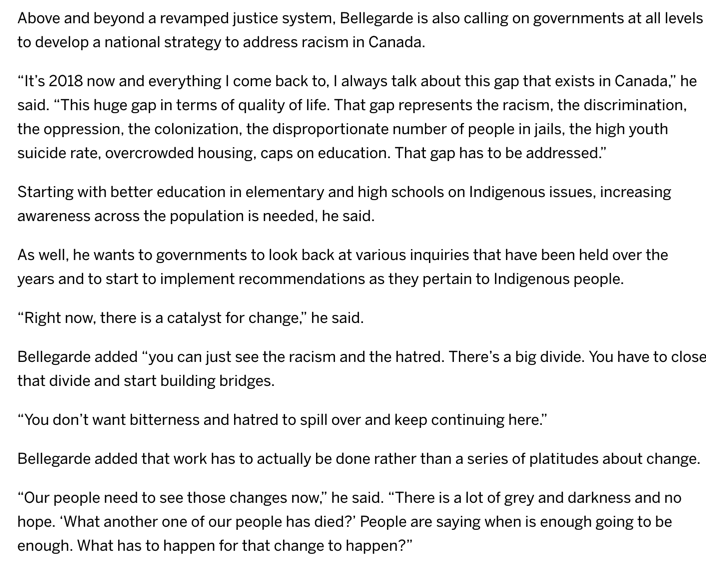 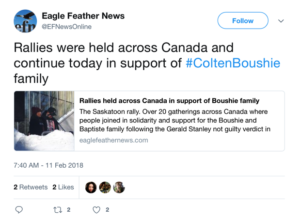 Look through the images from the rallies held across Canada.

How are the rallies represented?

Whose voices are heard?

How might these rallies be viewed as a response to white supremacy?

What makes a rally effective?

Kyle Edwards: “The Gerald Stanley Verdict is a Blow to Reconciliation – and a terrifying one at that” 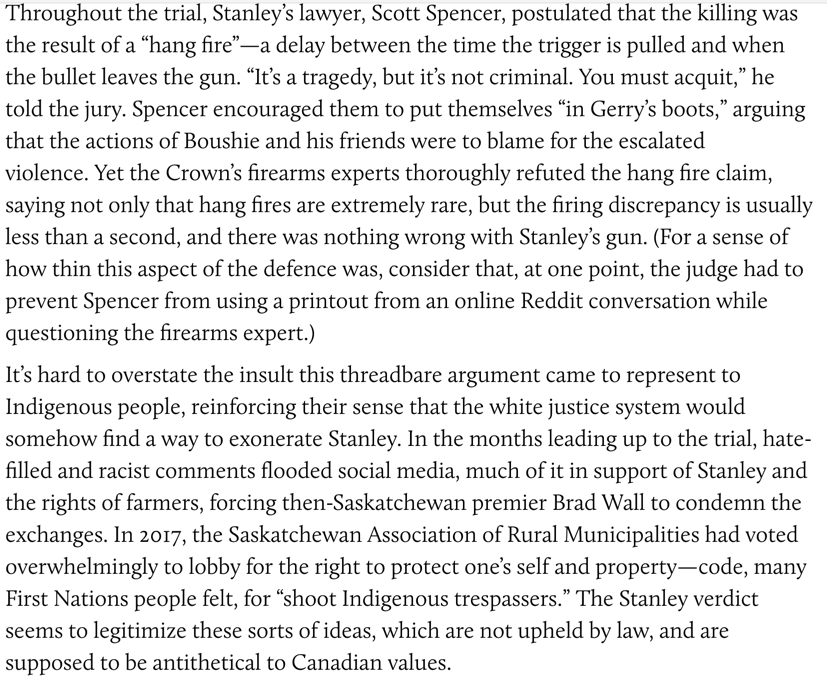 Robert Jago: “All-White Jury Runs From Justice in the trial of Gerald Stanley” 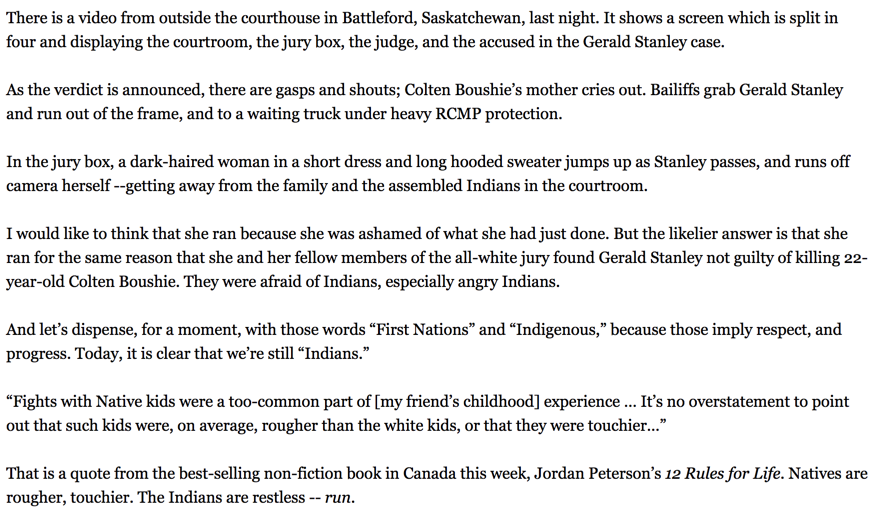 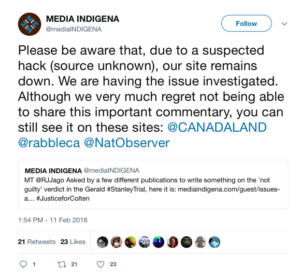 Jago, Robert: Thread on the Jury in the #StanleyTrial 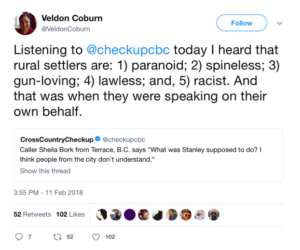 How might the perspective of callers to this show (or who may be expressing these ideas across other platforms) reflect ideas about white supremacy?

What are some common characteristics of white supremacy that you can identify?

About the differences of urban/rural experience?

Do perspectives vary in different regions of Canada?

Are we truly able to confront our country’s acceptance of racism and white supremacy? 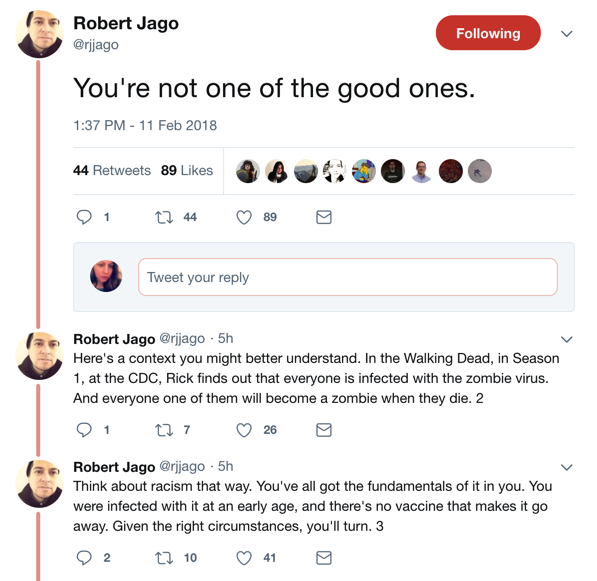 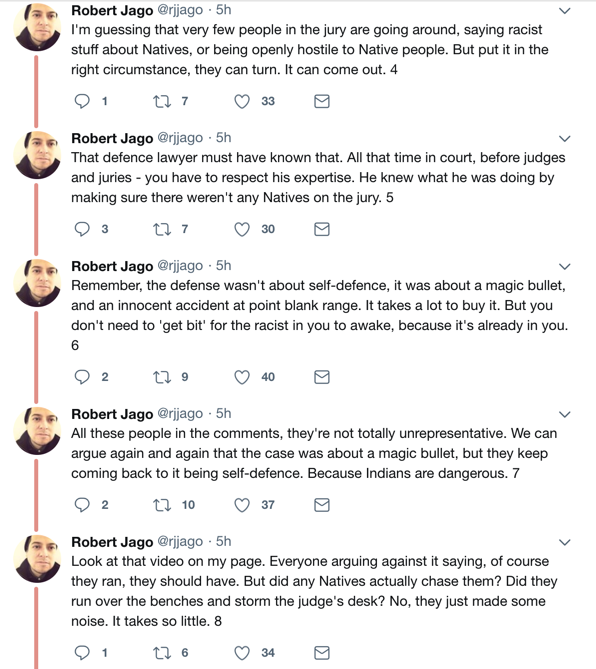 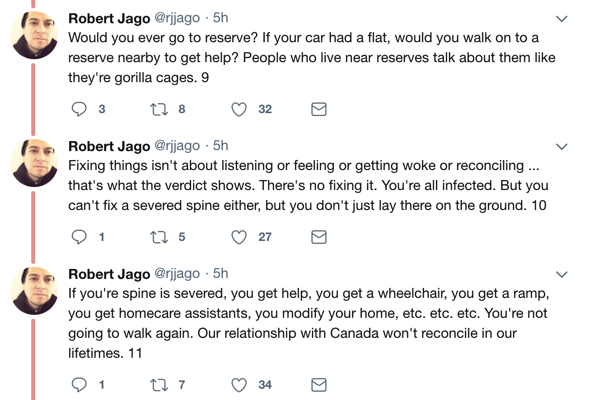 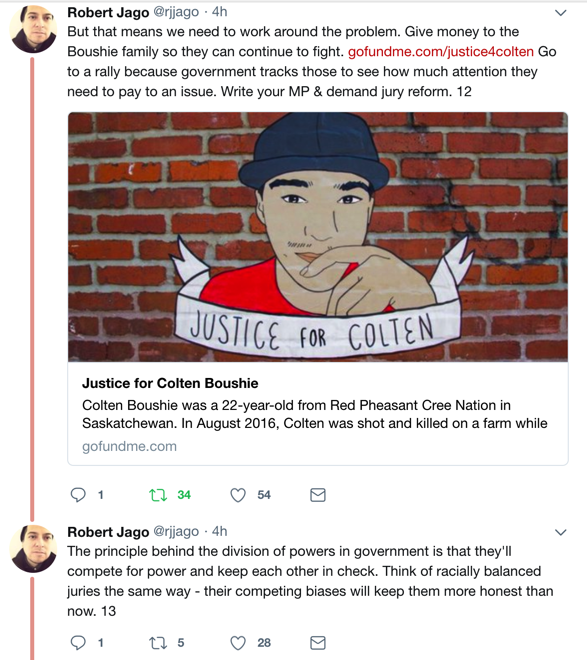 Jago, Robert. “Gerald Stanley and The Fear of the ‘Indian’”: 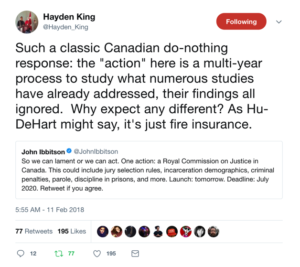 Whose interests are served by further study?

What information do we already have from existing studies?

How could it distance racist/white supremacist institutions and populations from the issue?

How might this process disenfranchise the people who are most affected by the problem?

Can you identify more effective solutions? 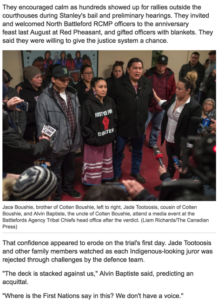 How does this poem illustrate the effects of white supremacy?

How does having an all-white jury impact the family of the victim?

How does having an all-white jury impact the defendent?

How did the family and supporters respond to the legal process?

How did the legal process treat the family and supporters?

How were they characterized?

Op-eds and other well-meaning supporters compared the incident to the Southern U.S. in the 1950s or to the shooting of Trayvon Martin and other African Americans. 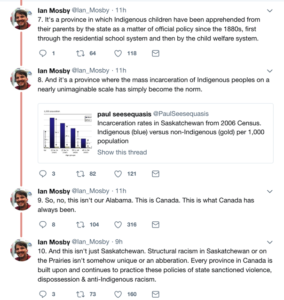 What Can We Do?

Act as an Ally: one suggestion 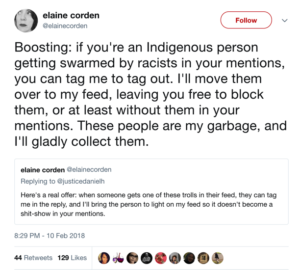 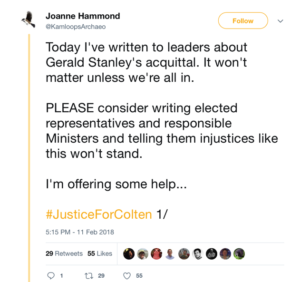 Fattal, Isabel. “Why Do Cartoon Villains Speak in Foreign Accents?”. The Atlantic. January 2, 2018.

Nardozi, Angela. “No Justice for Colten Boushie” – list of resources for teachers about the case.

Veldon Coburn: A suggested list of resources in connection to his Indigenous issues lecture:

(These ideas can be adapted to an Intermediate or Secondary classroom – ed.)