I think this is the first time that I will have posted an identical blog post in three different virtual places simultaneously:

This is because the topic is relevant to all three sites: my recent use of the video game Animal Crossing: New Horizons.

Animal Crossing: New Horizons is a video game produced by Nintendo for the Switch console system. It has become a very popular game to play during the recent global pandemic for many reasons. This game set sales records and created buzz in the mainstream media.  This article consulted game developers and asked them to explain the reason for the game’s popularity. They mention things such as:

I can tell you why I enjoy the game.

1) It’s something to do that is enjoyable and can use many hours.

Animal Crossing: New Horizons is a lot of fun. There are so many things to do each day. You can go shopping (at Nook’s Cranny or The Able Sisters, plus the assorted vendors that show up in the town square to buy and sell their specific wares – anything from Leif with his flowers to Daisy Mae, who offers turnips only on Sunday mornings for the stock/stalk market and trended on Twitter last week). You can visit others, whether they are “real” or not. Fishing, gardening, bug catching, shell collecting … I can spend hours playing and it helps pass the time. It’s a place to go when I can’t actually physically go anywhere right now. As this article from the Daily Mail suggests, the game eats up your spare time and many people (who aren’t essential workers) have a lot of spare time on their hands right now.

2) The game has cross-generational appeal, and not just for “gamers”.

In my nuclear family of four people that reside in my home, three of us play Animal Crossing: New Horizons (which I will refer to in the rest of this post as ACNH) every single day. The game demographics are quite wide. The rating of the game suggests that it’s for children, but this article by the New York Times describes its appeal to millenials. Dr. Romana Ramzan, an expert quoted in this article, explains how the game is attractive on multiple levels. Children can do adult things, and adults have a gentler, idealized existence where you experience calm and control. It’s a simple game to learn but allows me a lot of creativity, like this post by website The Gamer says.

3) I can play the game whatever way I want.

The last game to captivate me in such a way was Minecraft, another “sandbox” game that offers multiple ways to interact. (The game I loved the most before that was Webkinz.) I notice that my young adult daughter, teenage son and I all play in different ways. Our methods relax us, like this article by the SpielTimes mentions, and we all have different priorities – and that’s okay. There are benefits to engaging in certain activities but players do not fail if they ignore or minimize those tasks; for instance, I had not been visiting the villagers inside their homes regularly, which meant that I received less DIY recipes from them.

4) The game provides me with a social outlet and achievable goals.

Sometimes, my family will sit down and just watch someone play ACNH. It’s gentle and calm, as this How To Geek article describes, but it is also entertaining. When my son landed on Tarantula Island, we all watched attentively as he captured the “most dangerous” creatures in the game. (Tarantulas make you faint. You can’t “die” in ACNH but seeing a big spider attack you is thrilling enough.)

I’ve also invited some of my friends that also own ACNH to our island. It’s the only way we can visit each other right now. We love seeing how others have designed their islands and visiting with the non-player characters that live alongside them.

I love to take photos in real life and I’ve been able to transfer this hobby into the virtual realm. I’ve linked my ACNH account to one of my social media accounts and have been posting screen shots of my adventures (late at night, so that those who aren’t ACNH aren’t peppered with too many photos of my video game play).

ACNH can also be used to explain every single media literacy key concept.

My current / new reality is partially shaped around my game play. I report to work (which is just another room in my house) from 9:00 am until 4:00 pm and then I go visit my island of Morioh. On Saturdays after 6:00 pm, each of us visits the island for a free concert by the ACNH singer KK Slider. On Sundays before noon, some of us seek out Daisy Mae to buy turnips.

The avatars on ACNH are flexible. Players set up their virtual stand-in at the beginning of the game but then have options to change it throughout the game. My wardrobe in ACNH is gorgeous and probably more along idealized versions than reality. However, I chose my hair to closer match the actual colour and the way that my hair growth has “wings” sprouting from the sides. My ACNH house is tidier and much more coordinated than my actual house.

ACNH has its own set of memes, in which the community of players exchange jokes and humorous observations that would be lost on non-players unfamiliar with the “lore”. Also, I have been very cautious not to post any ACNH images during school hours, because audiences might see this activity as unfitting for a teacher or a waste of time.

Ontario Premier Doug Ford was extremely unhappy with EB Games and their lack of safety precautions when they released ACNH – this caused huge lines to form in front of stores as consumers purchased the physical copy of the game. (My own family decided not to line up on the day it was released and had to wait three [long] weeks before they were able to order and receive a copy of the game.)

In-game economics are significant. Bells (and Nook Miles) are the currency and expanding connections helps you financially if you are interested in buying and selling turnips at a major profit. Players will sometimes offer their island access codes if their turnip prices are particularly lucrative, and even celebrities like Elijah Wood can come to your island to take advantage of the great offer.

You can earn money in different ways. My son’s favourite way to earn money was to go “tarantula hunting” on other islands that you can travel to after buying Nook Mile tickets. He taught me the strategy to maximize his captures (nicknamed “No Bully Lane” (c) 2020) and if I’m patient, I can wait to sell the tarantulas (or scorpions, because tarantulas aren’t in season right now) for the regular going rate plus 50%.

What does it mean to be a good citizen? This message is shared in so many ways in ACNH. Good citizens pick up litter, like fallen branches. They chat with their neighbours and bring them medicine when they are sick. They are active and wander the island. They donate items to the museum. They contribute to the prosperity of the island by buying and selling items from regular vendors (Timmy and Tommy, the Able Sisters) as well as visiting salespeople (CJ, Flick, Leif, Kicks, and even “shifty” characters like Redd the Fox who sells authentic and fake pieces of art). 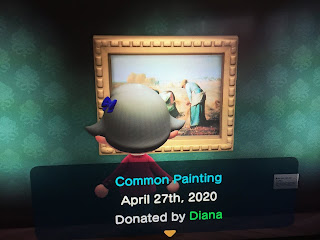 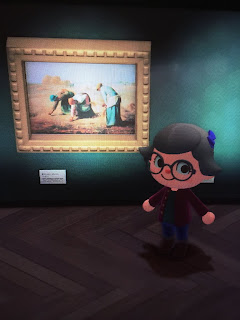 It’s not just me who thinks this. The Atlantic ran an article called “Animal Crossing Isn’t Escapist; It’s Political” and does a convincing job of describing how it supports capitalism AND pastoralism. There are elements of consumerism but also community works.

I do not know if the gender constructs in ACNH have been examined, but they are present and fascinating. There are eight types of villagers, four male and four female. The female types are sisterly, normal, snooty and peppy. The male types are jock, smug, lazy and grumpy. There are a few characters in the past that push beyond the binary, but they aren’t very popular. My daughter also informed me that the player character’s gender is not fixed. This game, she tells me, is popular with trans fans because it doesn’t ask if you are a boy or a girl. The pronoun used by villagers to refer to players is always the gender-neutral “they”. Speaking of popularity, there are over 300 non-player characters (NPCs) that can be your villagers. Certain villagers have become very sought-after and the reasons center on their beauty. Their personalities are limited to their type, so the only difference is their appearance.

7) Form and content are closely related in each medium.

ACNH is a video game, although more precisely it is a “life simulation video game”. As such, it has game elements as part of daily chores and tasks. Will you catch that fish or will it get away? What fish will you catch? How might adding fish bait to the water increase your chances?

8) Each medium has a unique aesthetic form.

It is easy to recognize the “style” of ACNH, both visual and behavioural. When you catch something like a fish or a bug, your avatar holds it up to the camera for the player/audience to see, describing what has been caught and adding an amusing pun.

There are different clothes associated with different cultures but whatever you wear, you can tell you are in ACNH. There are different objects you can buy, learn how to craft, or can be gifted (thanks to floating presents in the sky). They can be recognized as coming from ACNH.

In conclusion, I don’t see any conclusion to my Animal Crossing New Horizons obsession / admiration in the near future. I won’t be including it in my teaching (because not all elements of popular culture should or must be included into education), but I will be using ACNH avatars as a club photo in lieu of our in-person group photo. If you ever want to visit my island, contact me and let’s see if we can connect – just make sure to abide by those hospitality rules that makes ACNH such a beloved pastime of mine and others.

#medialiteracy is the most important skill
https://www.washingtonpost.com/world/2021/06/07/canada-residential-schools-pope-francis-egerton-ryerson/

Powerful media stance, poignant police truths, impactful video…This is a great #medialiteracy conversation to uncork w/kids…Why was it NOT aired on Fox? Who makes that decision? What were they trying to achieve or avoid? Why WAS it aired on MSNBC? Same Qs… #insurrection https://twitter.com/MeidasTouch/status/1402118426307350528

#k12media #medialiteracy in what ways are these types of deals a throw back to the early studio system in Hollywood? How are they different? What ways might this open up the possibility for new creatives to break into the industry? https://twitter.com/PopCrave/status/1401997288717918225

Lopez will produce feature films, TV series and unscripted content, with an emphasis on projects that support diverse female writers, actors and filmmakers.