Depending on the speaker, media education can be full of doom-sayings and dire warnings. “Beware the fakes” is the rallying cry.

On November 3, members of the AML will present a talk for Third Age Learning Guelph entitled “The Good, Really Cool, and Fun Stuff”. This won’t happen in time for Media Literacy Week 2021. To capture the levity, I want to highlight four items that are faked but are still smile-generators for me. This list excludes deliberate fake creations, such as April Fool’s Day pranks and articles from satire news sites such as The Beaverton and The Onion.

I first saw the Flight Attendant “Interview” on Twitter. It wasn’t marked as a spoof or parody, but there were some clues that it was not an actual clip from a news broadcast.

The interview was a bit longer than a typical “sound bite” and the purported employee was a bit too emphatic and uncensored. James Bates, a comedian and YouTuber, created this hilarious “interview”. A Variety article about the viral video stated that several news outlets initially thought this was real.

The Reasons for the Smile:

The monologue was hilarious! Watching this video also fed into my need for badly-behaved people to get their “just desserts”; unfortunately, the actual airline employees that duct-taped the offensive passenger to his seat got into some trouble for their actions.

My husband alerted the rest of the family to this incredible video he found, and it was our children that pointed out that it was not quite what it seemed.

Our children pointed out that the tentacles were all moving in too coordinated a fashion to be from a real octopus. A search for the initial source of the video locates it on sites such as “9gag”, which is a joke website.

The Reasons for the Smile:

This is really great CGI and there’s something appealing the artistry of a well-designed special effect.

Why did the chicken cross the road? I have no clue, but have you seen the ducks in action?

Snopes pointed out a few indicators that suggested all was not as it seemed. The shadows do not match the ducks and they appear to glide across the street. Snopes ranked this as “Unproven” rather than as “Fake”, but there are questions to its authenticity.

The Reason for the Smile:

There’s a reason why cat videos own the Internet – adorable animals are fun to watch, especially when they are doing something cute or amusing. Does it have to be real to still be watchable?

The Book of Veles – The Macedonian Troll Farm and Jonas Bendiksen

My husband was the source of this fascinating example for me. As this CBC Radio report shares, a Norwegian photojournalist created a book about the fake news industry flourishing in a particular town. The book was even profiled at French festival – but all the photos were fake. 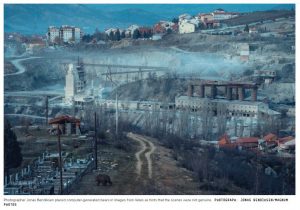 Bendiksen said that he deliberately put “breadcrumbs” in the pictures to hint that there is something amiss. For instance, he inserted many photos of bears wandering the city. In an article by Wired,  Bendiksen even confessed that the introduction was generated using artificial intelligence.

The Reason for the Smile:

This example proves that even the most sophisticated and well-educated people are capable of being fooled by technological manipulations. Many people like to believe that they are smarter than the average citizen and savvy enough to detect a fraud but it’s not easy. Bendiksen even outed himself through a fake Facebook profile that he paid $40 to access. The Book of Veles is a lesson for media literacy educators. Check your hubris at the door.

Great discussion opportunities!
Who should be banned? Why? How long? Who decides? How?

Today the EU published its strategy to combat child sexual abuse. First scan looks fantastic. Stuff we have been campaigning on for years. @Childmanifesto @ECPAT

Why is language a site of struggle?

What is a metaphor?