From Memphis to Missouri: Voices and Echoes 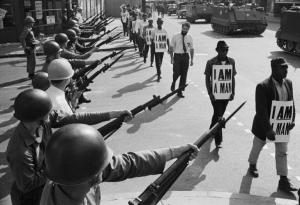 The U.S. Civil Rights Movement reached a peak in the 1960’s with widespread reactions to systemic racism boiling over into protests that were both violent and non-violent. At the heart of these protests that marked an entire era in World History was the hope that future generations would reap the benefits of a society governed by policies recognizing all human beings as worthy recipients of basic rights, safety, and opportunities for success.

The tragic shooting of Ferguson, Missouri, teenager, Mike Brown (August 9, 2014) by police officer Darren Wilson, followed by the recent announcement that Wilson would not face criminal charges, has sparked an international outcry for changes to a justice system that many feel targets Black bodies.

There’s no doubt about it: this is a difficult topic to think about, let alone address with your students.  Within the discourse on race relations, there are many psychological and emotional triggers. As educators, we know that our students are coming to us with vast life experiences – many of which may be reflected in the very headlines we worry about bringing into the classroom.

So how do we approach sensitive subject matter like the events in Ferguson without re-victimizing individuals in our classrooms who have lived the pain of being harassed by an authority figure, for example? How do we address the divisive issue of violence vs. non-violence when it is likely that some of our students will identify with what they see as justified rage on the part of the protesters? The answer is to explore the facts from as many angles as possible; to listen to the narratives that emerge when students feel safe; to pose critical questions that serve to generate other questions so as not to give the dangerous impression that any one person or group of people holds the answers.  Ultimately, it is by taking a Media Literacy approach that we can navigate the very rocky landscape of racial inequality, systemic violence, and social injustice. If handled with care, the voices of our students will rise to the surface amidst the din of looping news coverage and sensationalistic reporting.

Here are a few ideas for starting the conversation:

There are numerous images from the 1960’s Civil Rights Movement that can be used to compare and contrast to images from recent events in Ferguson, Missouri.

A simple K-W-L chart could serve as a useful tool for describing content and exploring context in an objective manner. What do we KNOW based on the images, their content and captions? What prior knowledge do we have about the time period, the location, etc.?

Student response may include:

I know that image #1 was taken 46 years ago. It features armed men pointing their guns in the direction of (mostly) Black men who are walking in a straight line carrying/wearing “I AM a Man” signs. There is a line of at least three army tanks pointed in the same direction as the walkers. I know that the southern States in the 1960s were very divided racially… 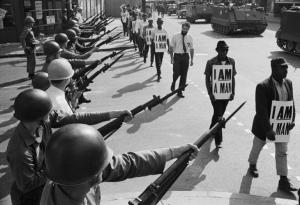 Applying the same process to image #2 should uncover similarities as well as differences.

I know that this protest involves men, women and children. I can see that the same word “am” is underlined. The protesters are using their voices. The protesters fill the entire street; they’re not following a straight line. I note that there is no evidence of police/soldiers in the image.

While the focus is on comparing and contrasting the two images, students will want to go deeper and talk about the societal values and beliefs these differences and similarities point to. What might the heavy military presence (image #1) suggest about the state’s expectations for the protest? What psychological effect might armed officials have on protesters? How might the absence of armed officials affect the nature of the protest? How might the absence of armed officials in the photo affect the viewer of the photo? What assumptions (about police presence or absence) does the Ferguson image provoke? Consider the presence of a non-black protester in image #1. Why might he not be carrying a sign? What does his presence say about the issue at hand? Do you see any non-black protesters in the Ferguson image? What might viewers think about this protest when there are no non-black protesters? What does it mean to be an ally?

This could also be the perfect entry point into a discussion about the legacy of movements; what values, frustrations, and demands fueled the protests then vs. the values, frustrations and demands that are being expressed by the people of Ferguson in 2014. Students could construct a timeline of events, photographs, speeches, etc. capturing said legacies. 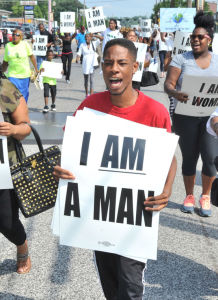 Image #2: I Am A Man Photo by Wiley Price, St. Louis American

Authentic student engagement is harnessed with the WANT to Know column of the K-W-L chart.  Students are encouraged to generate as many questions as possible.  We have to remember that this inquiry-based approach to learning will launch students into a complex network of information and misinformation.  The challenge is to continue to remind students (particularly in light of the above-mentioned themes) that they must look beyond mainstream media to the voices that have historically been silenced or distorted. The onus is on us as educators to remind students to consider different and differing perspectives when consuming media. Although a mainstream news outlet, the CBC addressed the unrest brewing in Ferguson on its program, The Current (November 19, 2014).  Interviews with diverse members of the African-American activist community provided a balanced look at the relevant issues plaguing the people and the region. The disparate views expressed on the program highlighted the fact that even within groups unified by race, it is presumptuous to think that there is a singular experience of racism let alone one response to alleged injustice.

There are many resources available to help students with the answers to their questions – particularly those having to do with recent events in Ferguson.  Many of the articles, videos, and blogs listed below will address questions about who, what, and where.  However, the why questions will present the perfect opportunity for teachers and students to engage in critical analysis of the larger issues:; namely systemic racism, the militarization of the police, power and privilege.

Historically, to participate in large scale, critical dialogue about the structural nature of anti-Black racism, one would require access to institutions offering African-American studies or the Black church. Today, many of these urgent conversations are taking place via social media.  Timelines and blogs belonging to a new generation of civil rights activists provide our students with access to a vast range of perspectives and critical discourse.  Here’s a shortlist of dynamic writers, speakers, and activists currently galvanizing the masses with their voice.

Not only have these virtual forums become spaces for dissemination of crucial information and timely updates from the ground, but they also serve as active spaces for affected communities to commiserate, organize and heal.  This is a very important feature of the protest to point out to young learners (no matter their race) who by virtue of their physical and/or emotional distance from the actual events of Ferguson – may not be aware of the privilege inherent in observing from the outside.

Privilege is yet another persistent issue that underpins tragedies like the ones that we’ve witnessed in Ferguson, Missouri.  There can’t be a meaningful discussion about racism without understanding the privileges afforded to the dominant group.  Therefore, in cases of anti-black violence and disenfranchisement, white privilege inevitably rears its head.  Applying a media literacy lens to the question of white privilege raises questions like, who owns the media and therefore has the privilege of framing the report? Following the announcement that a white police officer would not be charged for the killing of an unarmed black teenager, thousands of Ferguson residents and activists from all over country took to the streets in protest. Many accused the mainstream media of focusing on the ensuing looting and not the controversial decision made by the grand jury. (Key questions: Why might news directors prefer images of burning and looting to the district attorney’s grand jury statement? How might these images promote stereotypes?)

In response to unbalanced coverage of the events in Ferguson, “Black Twitter” surged with accounts of what was really happening on the ground.  Hashtags #FergusonDecision, and #BlackLivesMatter were used to string together the voices of those inextricably joined in disappointment, sadness and rage.  As students explore the modern-day protest, encourage them to think about the messages embedded in hashtags.  Are hashtags modern-day protest poster slogans? Like “I am a Man,” does the phrase “Black Lives Matter” get to the heart of the issue? Is it as effective at communicating a protesting community’s mandate, a generation’s pain? In what ways does #blacklivesmatter capture a moment in history? In what ways does it inspire hope or change? Is re-tweeting as powerful as marching?

Garza, Alicia. A Herstory of the #BlackLivesMatter Movement. The Feminist Wire.

MediaSmarts has a great lesson on bias in the news. If teachers and students are looking for articles or resources to better understand these events, it would be a good idea to begin with a conversation about the types of bias that they may encounter.

Consider each article taking notes in the following chart:

Have students write a response or share their findings considering the ways in which the story can be constructed depending on the source, writer and audience.

The articles below may give additional information for teachers and students who wish to look at the specifics of what occurred in this case. Please note that none of the individual accounts will be complete, and as always, we should consider what information is present and what is missing. Consider key questions (Who? What? Where? When? Why? How?), look for balance in quoted experts, witnesses, etc.

Consider President Obama’s address to the protesters and the nation after the grand jury decision: 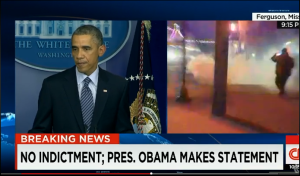 This is a really interesting moment to explore with students. The video should be considered using the “media literacy triangle”.

What values are expressed by the President? The visuals? The network (CNN)?

How does each element contribute to the values messaging?

How might audiences understand this text differently if they have seen other statements by the president after similar shootings (for example the shooting of Trayvon Martin)?

If they had considered the effects of a militarized police force?

Within the context of other public statements and interviews about this case?

How do the captions/subtitles influence their understanding of the split screen and speech?

What is highlighted? What is not?

(These ideas are adaptable to an Intermediate and Secondary classroom – ed.)