Brahm Finkelstein has designed and marketed a set of specially-designed Russian Dolls to protest Russia’s anti-gay legislation and raise funds for LGBT sport. 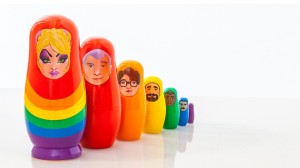 They are available from http://www.pridedolls.com/

The sets are based on matryoshka dolls, also known as Russian nesting/nested dolls, a long-standing stereotypical Russian toy dating from the 1890s. The Pride Dolls have been re-designed to represent “popular flavours from the community.” Among them are a drag queen and a bear.

The dolls and their marketing provide great discussion opportunities to help students and teachers understand the oppression of the LGBT community in Russia, international politics and marketing.

What is Russia’s legal stand on homosexuality?

What is the policy of the international Olympic Committee on homosexuality at the Olympics?

What stand has the International Olympic Committee taken on Russia’s policy on homosexuality?

What do you think Canadian Olympic athletes should do if they want to protest Russia’s anti-gay policies? Why?

Why might LGBT athletes or fans feel uncomfortable at the Sochi Olympics?

Should LGBT athletes refuse to participate in the Olympics by way of protest, or should they participate and defer their protest to another time? Why?

What kinds of protest might athletes, spectators and participating countries exercise?

Who is the target audience for the Pride Dolls website? How can you tell?

Why might Mr. Finkelstein, the Pride Dolls entrepreneur, make a point of stating that he is a “straight ally?” Why does it matter if the entrepreneur is straight or gay?

Mr. Finkelstein hopes that the dolls will provide a useful discussion platform. What kinds of discussion do you imagine might occur around the dolls?

How is the visual design of the dolls a clever artistic pun?

How is the copying of the traditional Russian doll design a clever political statement?

How is the design of the dolls an example of remix?

What prior knowledge must the audience have to understand the meaning of the dolls?

How does the design of the dolls express the diversity of the LGBT community?

What representation of the LGBT community might be missing?

If you were to improve this set of dolls’ design and political message, which face might you remove and what face would you replace it with?