The Bias in Media Bias Charts

On October 13, 2021, two members of the Association for Media Literacy ran a presentation, part of an eight-week series, for Third Age Learning Guelph. The topic of this particular session was Finding Trusted Sources and Evaluating Information.

In this presentation, we shared a few examples of media bias charts. However, the examples we highlighted focused on American news outlets. This was not an oversight; American culture has a huge influence worldwide. In the question and answer period that followed, several audience members asked about where on the spectrum certain Canadian news outlets would be found. A commenter also reinforced the message we mentioned during our talk that these charts themselves aren’t always accurate and can be polarizing. I thought that examining Canadian media bias charts would make a great article for AML – and here it is, in time for the 2021 Media Literacy Week (October 25 – 30) #MediaLitWk.

An initial search for “media bias chart Canada” begins with this article from The Canadian Encyclopedia. The article provides a great overview of general ways that the media can be biased, from selection/omission, to placement, to headline, to word choice and tone. The examples that the article, written by Jon Tattrie in 2019, provided were Canadian – Ontario Premier Doug Ford marching in the York Pride Parade that year, or Justin Trudeau becoming Canada’s Prime Minister in 2015. Tattrie described specific Canadian news outlets like this:

For decades, many newspapers openly leaned left or right (e.g., the left-leaning Globe and the right-leaning Empire newspapers). Today, people are more likely to find openly biased reporting on left-leaning websites such as HuffPost or Salon, or the right-leaning Drudge Report or Rebel News. Some studies have found that the CBC has a left-centre bias. However, that tends to be largely offset by factual reporting that includes multiple perspectives.

Tattrie identified the various corporations that own Canadian newspapers – TorStar controls 80 newspapers. PostMedia Network Canada Corporation controls 140 outlets. The Irving Group controls many radio stations and newspapers in Atlantic Canada. No visual accompanies the placement of any of these outlets along a political spectrum.

An attempt to provide a Canadian-only media bias chart was made by Reddit user “stevland” and posted a year ago. Many of the 28 comments following the post were skeptical of the placement of the Canadian news outlets. 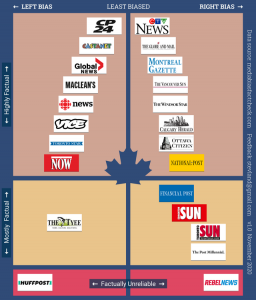 Commenters asked for sources to support the placement on the chart. The creator explained that “all of the data was extrapolated from mediabiasfactcheck.com“. Another user, “Timbit42”, suggested NewGuard [sic], AllSides.com, and AdFontesMedia, recommending that users “submit Canadian sites to all of these and if you think their ratings are wrong, contact them and let them know why so they can improve their quality. Also, check into how they produce their ratings and suggest how they can improve their process.”

On July 4, 2020, Ontario education blogger Doug Peterson wrote on his site wishing for a clearer, Canadian version of the “busy” media bias chart his friend Peter McAsh shared. Andrew Forgrave, past president of ECOO (Educational Computing Organization of Ontario), located a Canadian version on Twitter, but noted the following: 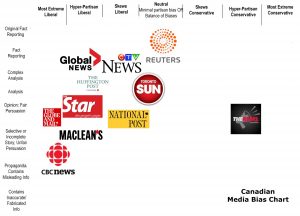 Using different search keywords results in different examples. When I searched “political leanings [name of newspaper]”, I found a Quora response. Quora is “a social question-and-answer website” and under the question “What are some Left-Wing Canadian news sources?”, a respondent named Ken Eckert stated that “For left, I’d say the CBC; for centrist, maybe The Globe and Mail and CTV; for centre-right, The National Post. For right, Rebel Media, though it isn’t a major source.” He also provided this visual to support his claims. 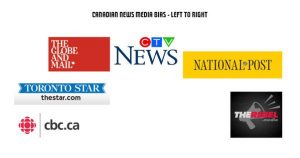 Another Reddit user, “mr_gemini”, used some very specific and measurable data to place newspapers in certain categories. They based it on which political party the newspaper endorsed. 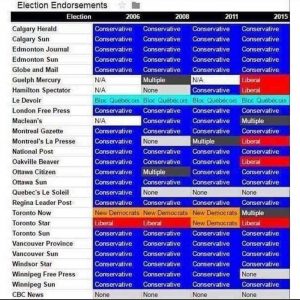 It is difficult to separate the creator’s opinions from the creation. This should come as no surprise; it fits with the media literacy key concepts that “audiences negotiate meaning” and “media communicate political/social messages”. Some of the “fighting media bias” sites attempt to be as objective as possible by hiring a diverse staff with various political allegiances. How might you place various news outlets? Twitter user @brianweishar challenged his Grade 12 students to assess the credibility and ideology of Canadian news media and place them on the chart themselves. For Media Literacy Week 2021, consider where might you place your friends on this chart and continue to think critically about the media we consume. 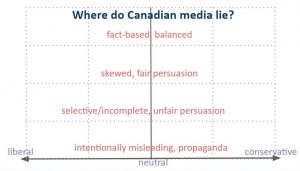 Great discussion opportunities!
Who should be banned? Why? How long? Who decides? How?

Today the EU published its strategy to combat child sexual abuse. First scan looks fantastic. Stuff we have been campaigning on for years. @Childmanifesto @ECPAT

Why is language a site of struggle?

What is a metaphor?