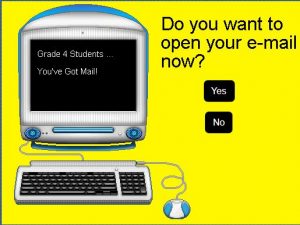 This is an adapted version of a blog post called “Salvaging Old Lessons for New Students”, also written by Diana Maliszewski, that first appeared on the Monday Molly Musings blog on September 27, 2021.

Part of the job of a teacher-librarian is to co-plan, co-teach,
and co-assess with classroom teachers and other educators. Right now, I’m collaborating with our new Grade 4-5 teacher (I haven’t written her name because I didn’t get permission yet to talk about her on my blog) to teach social studies. I pitched an idea that I’ve taught before for Grade 4 students that incorporates social studies, media, health, drama, and learning skills. She supported the concept and we tinkered a bit about how to include the Grade 5s. We launched it last week and the students are super-excited about it.

The lessons are “oldies but goodies” – in fact, it’s so old that the accompanying files were made using ClairsWorks and HyperStudio! Thankfully, my husband and I did some digging and found ways to open the documents. It was fascinating to see which aspects were outdated and which aspects still held up. I plan on writing a similar reflection for the AML website.

The first lesson of the unit involves a mysterious email. Originally, when I first taught this lesson, we used HyperStudio to explore the concept, a la “Choose Your Own Adventure”. I really liked (and miss) the non-linear way that HyperStudio operated, but the graphics were archaic.

The concept was still valid – it’s about a type of phishing email exemplified by the “Nigerian Prince” scenario. Back in 2004, I was pretty proud of my limited animation skills as the cartoon figure actually spoke and moved her lips and eyes. Now, I cringe at how primitive it looks. 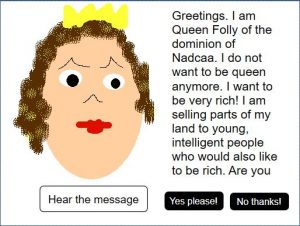 I updated the look of the email, eliminated the photo and audio components, and shared it with the students.

I also examined the explanation slide from the original work. I’ve learned so much more about media education since then. One important thought is to not position certain media texts as “good” or “bad” but rather as “interesting”. By avoiding a simplistic value judgement, learners can better examine the “strategies” (instead of “tricks”) that different media creators use to match their purposes and allow them to form their own opinions. After all, we educators use some of the same methods to attract our students’ attention, and I suspect we don’t want to be labelled as “evil manipulators”. Compare the 2004 rationale with the 2021 rewrite: 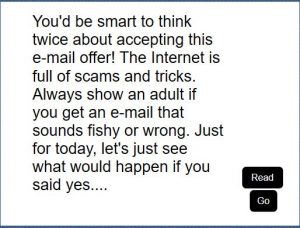 The ability to create attractive, realistic mock media texts has improved tremendously over the years as well. The final task in this unit is to participate in an auction to purchase chunks of land; I think I may revise the post-auction reflection to include a section on how land was seized from Indigenous people and sold without their proper input or consent. The money the Grade 4-5 students will use (Nadcaa Bucks) will be “earned” from demonstrating certain learning skills during the research process (e.g. staying on task, sharing resources, citing sources, etc.). I am aware of the dangers and problematic elements of creating a token economy in a classroom, but I justify my decision by noting that it’s a short-term exercise and that the fake funds are tied to the end task. Take a look at the money templates from before and now.

I guess the lesson that I’ve learned from preparing for this collaborative teaching unit is that I don’t always have to “reinvent the wheel”, but I cannot use older lessons without examining them first to update the words and images to better reflect my current understanding of effective pedagogy. There’s always room for improvement, even in “tried and true” tasks.

And don’t forget to register for our summer conference on De-streaming English! https://elanontario.com/events/

How does this Google Nose video use codes and conventions convincingly?

Media literacy is incredibly important. Both for print media and beyond. Students need to be able to communicate in many forms and to think critically about what they encounter and create. #K12Media @A_M_L_ https://twitter.com/teacher2teacher/status/1542999754342367232

What advice would you share with a new English T?

Shout out tips for @amber_klee as she prepares for her first day of teaching high school! 📝

This is one of the best stories I’ve edited at Sixth Tone, put together by the inimitable @peiyue_jess : much of Chinese Wiki’s coverage of Russian history turned out to be fake last week, made up over ten years by an aspiring historian (1/several) https://www.sixthtone.com/news/1010653/she-spent-a-decade-writing-fake-russian-history.-wikipedia-just-noticed.-

Really excited for this one. It’s a passion project in so many ways! I can’t wait to have these conversations. #ELANDestreaming #K12Media #OntEd https://twitter.com/ELANontario/status/1541768383242424320