Where have you seen Indigenous Canadian Art lately? by Irene Faiz

I have been seeing it everywhere!

And at the art galleries and museums in a range of exhibits.

I have noticed Indigenous Canadian art and artists represented in several shows on my travels within Ontario since last summer.

In September 2021 I visited the McMichael Art Collection in Kleinburg.  They very proudly displayed an exhibit titled, Uninvited:  Women Canadian Artists of the 20th century.  This exhibit also featured art by our female Indigenous artists.  Beaded moccasins and hats, parkas, and baskets made from cedar and cherry bark are amongst some of the art representing our Indigenous women artists. 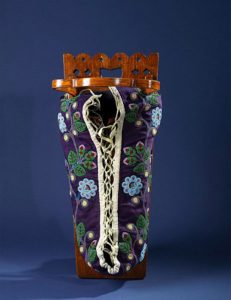 In October 2021 at the Royal Ontario Museum in Toronto, I saw Great Whales:  Up Close and Personal.  Yes, I saw and heard Indigenous art there as well.  A recording of the song, “All My People” was included for us to understand how humans and whales may live in different worlds, but we are together on this planet.  This exhibit included information about how our Indigenous peoples performed blessings to celebrate the life and spirit of the whales when they died.  We learned about the spiritual traditions of Indigenous Peoples and how they honoured these whales with ceremony and handmade artifacts such as baskets.

Ottawa. Toronto. Kleinburg.  These are the places where I have been gallery hopping lately.  And I have seen indigenous Canadian Art interspersed in the midst of a vast range of artistic styles and periods.

Is this intentional?  I think so.

Increased representation of art by Indigeneous Peoples in Canada are finally being recognized in our culture.

Ever since the first discovery of the unmarked graves near the Kamloops Residential School  in Kamloops, British Columbia, on May 28th, 2021,  we have been thinking about our Indigenous People.

Every aspect of their history is being told to us through their art.

Let’s look at this art to learn about the pain they have endured.

Let’s look at this art to learn their stories.

Consume their culture and also try to comprehend it.  Invite conversations with our Canadian Indigenous Peoples.  Be willing to listen.

New documentary by @TheDHTaylor out this Friday on @cbcdocs. And you thought, Searching for Winnetou was good. Wait till you see this one! Signature Drew on fakes, truths and what lies between. Airing Friday at 9 pm on the Passionate Eye. 👏🏽👏🏽👏🏽

How does the GIF affect the words’ message?

I can’t overstate how serious the storm surge threat is in southwest Florida. #Ian will drive deadly surge into Cape Coral and Fort Myers, placing much of the area under water. If you live near the ocean in a surge zone, this is your last chance to leave…

Orange Shirt Day should not be a called or turned into a “celebration”. It is our Remembrance Day. We honour and observe. This day represents many lost children and widespread intergenerational trauma. Its a time to learn and reflect. #EveryChildMatters