Be Careful What You Witch For 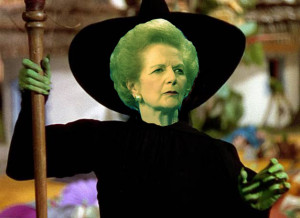 A week after the death of Margaret Thatcher, Ding-Dong the Witch is Dead, a song from The Wizard of Oz, had risen to the top of the pops in England as a measure of many Britons’ responses to her death. Respectful or not, this was an authentic cultural response to her actions while PM.

The BBC faced a dilemma, or maybe created a dilemma, because its Radio 1 Chart Show regularly reports the most popular songs of the week. That means it should have reported the popularity of Ding-Dong the Witch is Dead, just as it had reported popular songs in other weeks. But the purchases of Ding-Dong the Witch is Dead had been politicized, and the BBC action was likewise politicized. Pro- and anti-Thatcher groups argued for its inclusion and exclusion on the show.

The BBC decision was to not play the song in its entirety but to excerpt it and include it as a sound bite in a news report.  While this might seem to be a compromise, it is probably one that would anger both factions as well as implicitly confess that the Radio 1 Chart Show is much more than a news show—thereby providing a media literacy opportunity.

Treating the song as political rather than popular also draws attention to it. Had the BBC reported it as another popular song, with a mention of its barely-concealed political symbolism, it would likely not have been reported—by way of Reuters—in at least 12 newspapers, including the Toronto Star, more than 20 online news sites, and I would not have blogged about it.

In other words, it was the agitations and ultimate modifications that hoisted the events from a popular song with political symbolism to a story more about political meddling and entertainment media editing.  And that is where it becomes a worthy media literacy issue. It is events like these, where media institutions reveal their vulnerabilities, back-room decisions and actions, which help people to understand that most news reports are self-conscious constructions subject to personal and political pressures.

One of the motivations for Britons’ purchasing Ding-Dong the Witch is Dead was to get it onto the Radio 1 Chart Show, either as a joke or as a way to publicly express their feelings about Thatcher’s legacy. Changing the regular reportage into a sound bite drew the attention of Reuters and, by extension, many of its subscribers. The international news media attention ironically enhanced the protesters’ desired effects, supersizing their expression of disdain for Thatcher.

The take-away message for citizens? Media institutions, including public broadcasters, are vulnerable to political interference to the point where they will modify their own policies and practices. That means that they can be gamed by both private citizen action and political party action.

The take-away for media organizations? Be careful not to make complex situations worse, and even embarrassing, by obfuscation. In fact, transparency and loyalty to the BBC mission statements would probably have drawn the least attention and wrath. It would also maintain the integrity of the organization and the trust of its consumers.