The Media* as Opposition: Covering Trump in a Post-Truth Era** 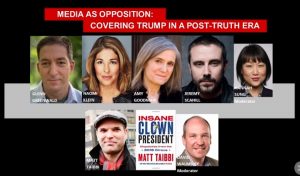 The Canadian Journalism Foundation sponsored 2 panel presentations exploring the theme of Media as Opposition on May 24, 2017. Four of the five speakers in the first panel were Americans, as was one of the two speakers in the second. Unspoken questions from the evening might be: Is media-as-opposition not also a relevant theme in Canada? and, Why are the CJF and Canadians so interested in American politics as to mount American-centric panels? 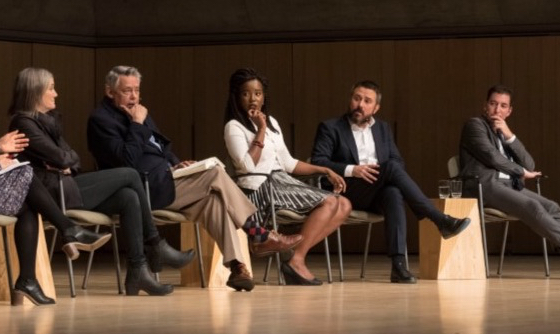 Naomi Klein, originally on the slate, had dropped out of the panel in protest, stating that there was insufficient diversity. Asians, Hispanics, Jews and Blacks were represented on the revised panel, but Klein’s objection was more likely aimed at the lack of ideological diversity. Rather than having a debate between people of differing worldviews, each panelist took a turn declaiming the ways that mainstream US news media have historically—and currently—failed to report social injustices and instead become mouthpieces or cheerleaders for those in power.

Following are some of the main points expressed by the panelists.

There is a telling disparity in the ways that deaths-by-violence are reported: the same degree and quality of reportage for the people killed in the May 22, 2017 Manchester bombing must be applied to each and every victim of Western military action in Syria and Yemen. She used the Manchester reportage as a model for reporting on human experience, and emphasized that media should cover issues of power and not report on behalf of power.

Juan González, co-host of Democracy Now! and professor of journalism and media studies at Rutgers University.

González had been a member of the Young Lords (a Puerto Rican paramilitary group formed in the 60s), who read McLuhan and realized that they needed to exert media influence. Many went into journalism after the dissolution of the Young Lords. In fact, many now-veteran journalists like Connie Chung and Geraldo Rivera went into the field after the citizen protests about lack of diverse representation in the profession.

Racist and activist journalists are not a recent US phenomenon, but have been a problem since the first newspaper issue that informed Boston colonists of the actions of the surrounding ‘savages.’

He believes in ‘news for all the people.’ As an example of activist journalism, he cited Frederick Douglass (1818-1895)—abolitionist, suffragist, author, editor, diplomat—who as a journalist took an oppositional stance on the Mexican/American war. As well, González reminded the audience that activist movements in general are a response by citizens who want to protect themselves against government actions.

Glenn Greenwald, Pulitzer-prize winner and co-founder of The Intercept.

Greenwald claimed that the primary purpose of journalism is to actively scrutinize and challenge power because all journalism is a form of activism. He founded The Intercept with Jeremy Scahill (see below) because traditional media had become supporters and mouthpieces rather than critics of politicians.

He cited the example of the coverage of the terrorist shooting and attack on Canada’s Parliament in Ottawa, and the media focus on Corporal Nathan Cirillo that made him a hero. The tendency was to create a “peaceful narrative,” but Greenwald found it interesting that Canadian journalists never name the victims of Canadian Forces’ violence in the Middle East.

There is a lot of journalistic talk about Muslims, but little from Muslims. He also said that citizen-activism has been enlivened by the Trump era (for example the Muslim cab drivers’ strike response at airports when Trump announced the ‘Muslim travel ban’).

Jeremy Scahill, war correspondent and co-founder of The Intercept.

Scahill protested that the 2 biggest lies (untruthful national narratives) in America are consistency ignored: that the Founding Fathers were noble, ethical people and that the US fought WW2 to end fascism. He explained that many of the founding fathers kept slaves, and that the US had previously declined an opportunity to eradicate fascism during the Spanish Civil War, an action that might have avoided WW2.

Scahill said that media organizations wanted to gain only an appearance of diversity by hiring people of colour that wrote/spoke like whites rather than had their own ethnic voices. He remarked that reportage on communities needs to be carried out by those reporting on their own experience. Relevance in diverse communities is the key issue.

On another topic, he noted that, ironically, the CIA and military are all being empowered by Trump’s lackadaisical attitude toward briefings and oversight; he emphasized that once they move forward (advance), they do not back up. He is especially concerned about that situation when a future president inherits the office.

Ms. Mochima, as a Black Canadian female, was the most obviously diverse panelist, but undermined her position with prejudicial remarks. She said that no one over 45 should be allowed to vote, that the Americans on the panel should stay in America, that Julian Assange is a rapist, and that the news media highlighted the BLM demand that Pride ban police from the parade and ignored the other 11 demands. Many of her remarks were unfortunate because they harmed her arguments in favour of inclusion and equity.

Vicky also said that she thought US news organizations were doing a better job than their Canadian counterparts in reporting their racial composition.

She remarked that equity is the next step up from diversity, but that journalists are failing at equity and that they do not value and respect diversity.

She reminded attendees to “check your assumptions,” and don’t only read the reportage of those with whom you agree.

and author of the recently published New York Times bestsellers Insane Clown President: Dispatches from the 2016 Circus, The Divide, Griftopia, and The Great Derangement.

Taibbi described how Trump—a privileged billionaire—accessed the sympathies of his supporters—largely working class—at his campaign rallies by vilifying the press corps as being urban elites that were against him and them. Trump referenced the press often at his rallies, asked the voters to look at them, and placed them on a riser so that they were physically above the rest of the audience. Americans are suckers for underdogs, and Trump represented the press corps as a symbol of elitist oppression looking down on him and his audience.

When asked how well he thought Trump would govern, Taibbi explained that Trump had been a successful one-man show during the campaign but would have to rule via committee, which he is not equipped to do.

Several panelists independently stated that public activism was the only effective way to respond to the injustices and behaviours of politicians and press. Several also challenged the notion of truth and partisanship, saying that reporting the truth was an impossibility due to personal biases but that agendas needed to be eschewed excepting for pursuing truth.

Overall, this panel was something of a disappointment—partly because Naomi Klein had pulled out at the last moment due to second thoughts about lack of diversity on the panel. Her replacement, Vicky Mochama, did not possess the insight, experience, or articulation about the issues that Klein might have; she was merely flippant and superficial in her remarks. As well, the panel itself represented the alternative-press POV only: no one from the mainstream press (the two Globe and Mail moderators) provided mainstream perspectives or an opportunity for more lively debate. Despite their impressive depth of experience and articulate views, the panel members (as well as audience) seemed party to the same worldview.

Perhaps Naomi Klein was correct in her concerns about a lack of diversity and her action sparked a scepticism in some audience members. Was it doomed by design and is that why Klein declined? On the other hand, was it realistic to expect a CBC, CTV, or National Post person to agree to be on the panel?

*The Canadian Journalism Federation uses “media” to refer specifically to what The Association for Media Literacy calls “news media.” The AML believes strongly that “media” and “news media,” “entertainment media,” “sports media,” etc. be separate terms because media are methods of communication, while “news media” are entities that use those media. Using “media” as a collective term inhibits critical thinking about either media or media institutions.

** The Canadian Journalism Foundation website stated that a video of the evening will be available, but none had been posted at the time of writing. Check here to see if the CJF has added a video link.