Singing Nun on Italy’s The Voice 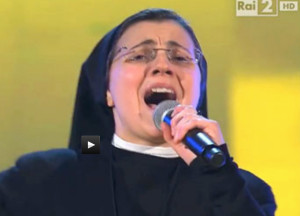 A viral video has circulated showing a young nun singing an Alicia Keys song on Italy’s The Voice. It makes for a wonderful discussion topic.

The facial/body reactions of the 4 judges to the nun’s identity is highlighted in the video. Each is dumbfounded/confounded upon discovering the source of the voice.

The compelling issues involve the contrasting costuming and cultures, which are highlighted in the people’s conversations.  Rock n Roll has long been considered sinful, beginning as ‘rhythm n blues’ and taking its name from black culture’s slang term for sex. Many rock stars, including the producers on the show, proudly characterize themselves as satanic complements to the nun’s virtue. When asked why she is singing an Alicia Keys song rather than something more religious, she takes a religious tack in responding that music is god’s gift, so her singing glorifies God.

Some questions students might discuss include: (thanks to Carol Arcus)

Might the audience love her less if she were not a nun? Why?

How does her habit and history contrast with the lyrics and melody of the song?

Externally she is asexual, but how how do her voice and the lyrics affect that image?
How does the fact of Italy’s growing secularism enhance her novelty?

How might her appearance make the Catholic clergy seem less stuffy?

How might her appearance encourage young people to consider a religious life?