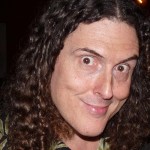 Love Pharrell Williams and Weird Al Yankovic? Want to have some fun with your students? Use these fun videos to get them thinking critically about the broad range of texts they encounter. The lesson ideas below are appropriate for secondary (high school) students, but may also be modified for use with middle school students.

Media Literacy, at its core, involves being able to read a wide variety of texts. In Ontario, we define “text” as “a means of communication that uses words, graphics, sounds, and/or images to convey information and ideas to an audience.”  Parody songs give teachers and students the opportunity to explore a variety of media literacy concepts and ideas. Perhaps most importantly, parody songs are a terrific way to explore the codes and conventions of texts.

Codes are defined as: the system of signs and symbols used to create meanings in texts. They are our first point of entry into a text. Codes would rely heavily on the rules of a particular medium (lighting, editing etc in film, words, symbols, etc in print).

Conventions are the commonly accepted ways in which the elements of the text and its content may be delivered. Conventions are not rules, they are simply agreed upon stylistic elements that depend upon culture, time, etc.

One of the most popular and compelling songs of the past year is Pharrell Williams’ “Happy”: 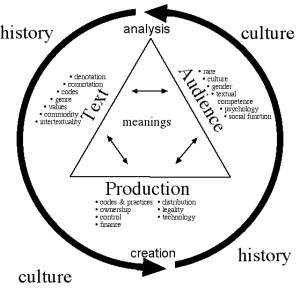 Use the media triangle to guide the discussion on parody music videos.

Some questions to consider after viewing the video might include:

What are some of the codes and conventions used in the video?

How is lighting (interior/exterior, day/night) used?

Who is in the video? What are they doing? Why?

How do editing/shot length contribute to the meaning of the video?

Where is the video set? What might be important about the setting(s)?

Who is the target audience for this video?

The codes and conventions of the music video become even more apparent when viewed alongside a parody of that video. Watching the videos side-by-side will allow students to gain new insights into both the original and the parody songs. Weird Al Yankovic released “Tacky”, a parody of Williams’ video.

Using the same questions as above, students and teachers can explore (and add to their list of) codes and conventions in the video.

Some questions to consider after viewing parody songs:

How does “Tacky” use codes and conventions differently from “Happy?

What makes the video a parody song? What is being parodied? How do we know?

Which codes/conventions are the same? Which are modified? Why?

“Tacky” was filmed in one continuous shot (according to Yankovic — he had to run down the fire escape & change clothes for his appearance at the end). What does this element of production add to the video?

Who appears in the video? Why might these people have been chosen?

How does the setting contribute to our understanding of the video?

How might the words of the song inspire us to discuss acceptable/unacceptable behaviour? Social policing?

How are codes and conventions of behaviour created? When should they be modified? Which practices are parodied? Why?

How might different audiences react to this video? Why?

After discussing the codes and conventions, extend the conversation by considering how different audiences consume music videos. Do your students consume videos differently now than they did in the past?

How do the two videos construct very specific ideologies or values?

Weird Al has stated that this will likely be his last studio album, though he has no plans to retire. Rather, he is considering his options for releasing his parody songs and videos through different channels. “I’ll probably just be releasing singles (possibly EPs) going forward – I really don’t think the album format is the most efficient or intelligent way for me to distribute my music anymore” (Yankovic via Reddit). How might a possible switch to digital distribution alter the way that music videos and parody songs are produced/consumed?

Possible extension: Have students create their own parody videos or video clips.

I’d love to hear how you use parody songs with your students. Please contribute any observations/additions that you’re willing to share in the comments below!

(These ideas are applicable to both Elementary and Secondary classrooms – ed.)