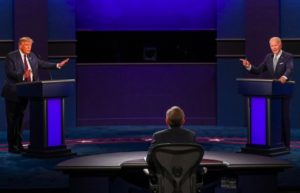 The October 5 and 12 Mediacy episodes referenced transcribed versions of the debate recordings that might be useful for Secondary Media Literacy, English, Drama, Civics, Journalism and History. Clicking on any of the time codes takes the user to a screen that displays the video and transcript playing in real time.

It is interesting to see the debates in writing and a great opportunity to judge them through another medium.

Does the presidential debate read as chaotic as it sounded?

What might be considered important moments?
Was Chris Wallace debating the President, as has been claimed by some?

Click on the image below to visit the transcribed presidential debate site.

Click on the image below to visit the transcribed vice-presidential debate site.

‘I did as well as I could’: Moderator Chris Wallace talks Trump-Biden debate

Did Trump display textbook signs of authoritarianism during the debate? Here’s what the experts say

Fact check: Biden did not say ‘his people’ would burn, loot and kill if he loses the election

(This op-ed above argues that it was a great debate because the candidates showed their true selves, and that Biden was the better for it. This argument is a good illustration of  the ‘medium is the message’  because it says the issues were irrelevant.)

‘The US voter’ was the ‘clear loser’ of the presidential debate

‘You’re the worst president America has ever had’

Additional resources we found during our research for the vice-presidential debate episode: