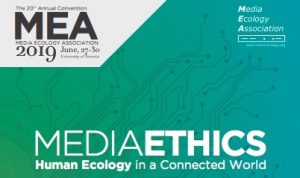 I attended the Media Ecology Conference (MEA) on June 28 and 29, 2019 in Toronto. Here are some of the highlights, and my take on the event.

1. The keynote speaker for the first day was Lance Strate – the American scholar who is a writer and professor of communication and media studies at Fordham University. He founded the Media Ecology Association and was president for 10 years. Strate is quoted frequently in the media about politics and social media. There were plenty of references to Neil Postman.

Here are some of his remarks:

-“media ecology” implies that media is an environment, ie “media as environment”. He exhorted us to study environments as media – so, applying media questions to environments. This aligns with AML’s approach to media studies – as opposed to an antiquated perception of media as technologies and communications forms and content, such as broadcast television.

-he quoted Hannah Arendt: “men create their own self-made conditions; we possess the same conditioning power as things..” We are conditioned by the conditions we create, and that condition us. (Just as the peasants’ postures changed with the use of the hoe).

-the study should be called “Understanding the Human Condition”! instead of Media

-today’s world is marked by the notion of the “saturated self, a multitude of roles.” An absence of ethical decisions/standards; guiding principles seem to be ‘more’ – more data, more efficiency. Efforts ought to be directed to solving real human problems.

-media ecology ethics: place emphasis on balance of the system

Are we enhancing the flexibility of the system?

Are we contributing to human progress by serving the ideology of the machine?

-it is unethical not to study media ethics, for every medium has a moral bias

2. Woman as a Machine (or the other way around): “the rise of the personal digital assistants” – Luiza dos Santos – Federal University of Rio Grande do Sul

Here is an excerpt for Dr. dos Santos’ description of her work:

“…personal digital Assistants (such as Siri, Cortana and Alexa) act both as a mediator of communication and as an object with whom we communicate with. They are talking machines, that have a specific way of responding, acting and interacting. As audio interfaces highly anthropomorphized they evoke issues regarding, among others, the voice (especially the female) as media (and it’s capability of evoking feelings), the role of women in a division of labour (also care as labour) and the political effects of thinking the machine is female. Through the analysis of dialogues and interactions with Alexa and Siri, this presentation proposes to think critically about the relation between computational machines and the female gender, linking it to the use of language, female voices and behavioural stereotypes that echoes back to Turing’s imitation game. In other words: what does it mean to talk to these devices as females, and how can we understand this specific kind of voice interaction?

This was a fascinating study, with comparison charts depicting the different responses the machines gave according to different kinds of requests.

– Figure/ground is the way in to understanding today’s environment.

4. Jaqueline Rogers: A feminist scholar at the University of Manitoba, Winnipeg.

-technology only benefits us when directed by principles from creative people

-McLuhan focused on effects, then causes. The effects were the figure in figure/ground.

-there are 2 modes of thinking – narrative and scientific.

Michelle Cheung – Senior producer, Enterprise at CBC Toronto – ‘There is pressure to get story right and especially first..

-the trend is to be more transparent and acknowledge that it may be ‘fake’; reporting on all the data, fake or not

-Matthew Ingram – award-winning journalist who has spent the past two decades writing about business, technology and new media as well as advising media companies on digital strategy. He is currently the chief digital writer for the Columbia Journalism Review

-why does misinformation work?

-people don’t care if something is untrue

-representation of shared belief – originally news was a form of drama. The idea of factual truth was irrelevant. Emotional content was important – who is winning, and who is losing.

Belief is not based on facts, but the desire to belong to a group of others who believe it.

-the most successful fake news plays on people’s emotions.

How to combat misinformation?

-Fact checking is OK but won’t make a dent.

-the Human problem not an information problem.

7. A salient quote about The Gutenberg Galaxy by M. McLuhan:

“The book’s main topic has to do with the senses we use to make sense of the world. When this orientation changes, men change. And they change when any one sense, or bodily or mental function, is externalised by technology. Imagination is the balance that exists when there is unity of experience, an entire, natural interplay among the senses; when no senses are “outered”. When outered, each sense becomes a closed system, and in “beholding this new thing, man is compelled to become it”.”

Ramona Pringle could not attend.

-Technology as money maker as well as communicators

-Reversal of figure and ground: We are the played, not the players. We are attuning humans to fall onto the quanta’s nose; shaping off the soul of humanity

-How can we use technology as people? We must retrieve human values. Through the arts, establish rapport.

-We must retrieve the values we see as essential and human. Don’t use tech to optimize human beings.

-has a suspicion about technology

-we have everything we need

-we are bored; psychic conflict

-we renew our desires but it fails to satisfy

-try to seek wisdom within the boredom; boredom is the wellspring of philosophers

-data protection act of Europe needs to emulated in Canada

The Gutenberg Parenthesis: the idea that the post-Gutenberg era — the period from, roughly, the 15th century to the 20th, an age defined by textuality — was essentially an interruption in the broader arc of human communication. And that we are now, via the discursive architecture of the web, slowly returning to a state in which orality — conversation, gossip, the ephemeral — defines our media culture.

– “There are in fact no masses; there are only ways of seeing people as masses.”

-W/o internet, would we have marginal groups for good causes?

-Internet is a platform for society 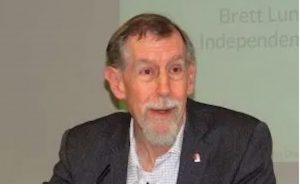 Eric McLuhan’s last speech: “‘Media Ecology in the 21st Century’, delivered in El Nogal in Bogotá, Colombia, on May 17th, 2018. He died, suddenly, the following afternoon. (Eric was the son of Marshall McLuhan).

Here are some soundbites:

-An education is what remains when you have forgotten everything else..

-Man made environments consist of services, disservices, and environments. MM: medium shapes the scale or form of action.

-Study of media is the study of IGNORANCE.

-All media are environments. Environments shape their occupants.

-Art dislocates our sensory responses. It is indispensable.

-Every medium imposes a new culture.

-Life isn’t rational, it is kaleidoscopic.

-Living at the speed of light means we live mythically – in all times and spaces and cultures at once. Eg, you can talk to someone who is already in tomorrow.

-Breaking news: you participate in news as it is occurring BEFORE it becomes news. News is what happens after an event.

Fake news is a species of creative writing: all news is fake news.

– Shift from hardware to software (money to bitcoin).

-We need to train idea and info hunters and conjurers.

-China never had a 19thC. So it was easy for them to leapfrog into digital..

-Work will disappear – there will be no specialists. We will be totally involved. The only occupation is info gathering..

-Smartphone incorporates all media: TV, film etc. Everyone is now a journalist w smartphone. Everyone can be an explorer.

-Gadget lover is the app collector.

-Simultaneously there and here.

-All cultures are now multicultural and multinational. So identity is confusing.

-Alarm, resistance, exhaustion, then acceptance: MM – re robots. That is where we are now with AI.

-Our media is still invisible to us.

Each new medium means the scrubbing of what came before. Many media are toxic, all are addictive. When the power goes off, we see the environment.

Media ecology has been delinquent.

What actions can we take?

-draw from the arts. How do the arts raise awareness? Integrate the training into the curriculum.

-local research of effects of all technologies

There’s only room for crew on spaceship earth.

This is an adventure in exploration; never been seen before.

Be radical in your approach. The most conservative people are the most radical.